MAD About Trump: A Brilliant Look at Our Brainless President by Various 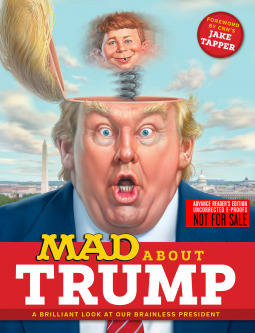 Oh, Various. You are prolific, aren't you? You've written about everything from Irish folklore to books about the best jokes, the most beautiful jokes, fantastic jokes. Obviously, when I saw that this prolific author had published a book making fun of Trump, I had to have it. I blew off watching Archer to read MAD ABOUT TRUMP, that's how thrilled I was. Archer. The new one.

First, a disclaimer. This is not going to be a pro-Trump review. Imagine that. A woman with a Women's March picture as her Goodreads profile photo (the SF one, no less) and the tagline "flagrant liberal" in her username reading a book that's making fun of Trump not being pro-Trump. It seems intuitive, I know, but I actually had someone accusing me of having an "agenda" a few months ago, and I had to laugh at that, because agenda usually implies that you're trying to hide your sinister schemes under some other sort of pretense and Blue's Clues is more subtle than that.

You know what they say. Sometimes the cigar is actually a d*ck pic.

MAD ABOUT TRUMP is a bit of a mixed bag. There are some genuinely funny passages in here, and some passages like Living Dead apprentice that just made me roll my eyes and scoff. I must say that I was impressed by the range. There's everything from movie poster art to comic panels to magazine pages to fake advertisements to poems and pretty much everything in between. The humor level ranges from sophisticated to low-brow (which is typical of MAD), so in a way, that's nice, because it almost guarantees that there is something in here for everyone, no matter your tastes.

Also, to whomever formatted this book: at first my heart sank when I realized that it was basically just scanned pages of the comic book as it would be read in hard copy form with both pages spread - but bless you for having the text on each page stand alone on each page, instead of forcing me to flip back and forth. It was very readable in e-book format, so that's something to keep in mind, as well.

Honestly, with what's been going on in the world lately, I needed this collection to make me laugh. And it did, a little. Enough to count. The beginning of the collection is a tad uneven, but it gets a lot better as you get closer to the end. (For some reason, they put a lot of the cheap laughs up front.) I was afraid it would be silly, but I actually ended up enjoying this comic book quite a bit! If you're tired AF of seeing BS on the news, and are currently between episodes of Full Frontal with Samantha Bee and Late Night with Seth Meyers, pick this book up when it comes out in June.