All About Passion by Stephanie Laurens 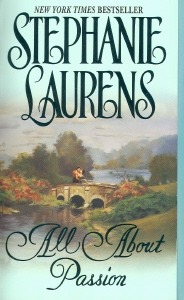 The Cynster series appears alongside a lot of other series I like, such as The Gamblers and Wallflowers series, so I've been meaning to get my hands on one of Stephanie Laurens books for a long time. When ALL ABOUT PASSION showed up at the local thrift store for 50¢, it seemed like the time had dawned for me to start living in Cyn(ster). That was a terrible joke and I'm sorry. But in a way that is actually perfect, because this was a pretty terrible book.

The plot is convoluted and I did not take notes, but basically it goes like this: Gyles Rawlings, Earl of Chillingsworth (heir to Dickensian surname), needs to take a bride, and what better bride than the woman whose inheritance is the property adjoining his estate? When he goes to seek her hand, he addresses not her but her uncle(?), and makes it clear that theirs is to be a loveless marriage where all he expects of her is an heir. When he spies a pretty blonde woman in the distance sitting quietly, whom her aunt calls "Franni", he naturally assumes that this is Francesca, the woman who is to be his bride. So naturally, when he crashes into a curvaceous buxom woman on his way out, he has no idea who she is, only that he wants her - immediately. He calls her "the gypsy," and waxes poetic on how his loins simply cannot even. I began to imagine him as Frollo, from Disney's Hunchback of Notre Dame, singing about raven hair and blazing out of all control.

It is literally that dramatic.

Guess what. Francesca and Frances (Franni) are cousins. If you think that this ridiculous coincidence is the pretense for a very long case of mistaken identity, you are correct. Francesca thinks that Gyles wants to marry her. So does Franni. Gyles thinks he's going to marry Franni, his biddable wife, and that Francesca is some random strumpet who is eager to lie in bed with him and plans to make her his mistress after just making the proposal of marriage to who he thinks is Francesca. If you think this is cheek, yes, yes it is. This results in 100+ pages of drahma, culminating in the wedding, where Gyles, who by ridiculous coincidence, has managed to avoid meeting his bride in any formal circumstances where someone could have corrected his error, realizes who he is marrying. Francesca, of course, figured it out when he had sex with her and referred to his bride to be in third person. She is outraged, but keeps having sex with him instead of correcting him and/or walking away. Rather than admit to his mistake, he and Francesca go forward with the wedding. They've already had sex by this point and continue to do so every other chapter (oh my God), but Gyles keeps insisting that their marriage is to be loveless. They basically torment each other for another 200 pages while Francesca succeeds in charming every member of the house staff, all of Gyles's male and female acquaintances, and every single eligible man within radius of the castle. They make each other jealous, talk about entertaining other lovers for their loveless marriage, and generally just petty the pet out of pettiness.

In the last quarter of the book, Laurens pulls a Lisa Kleypas and introduces a murder plot. Someone is trying to kill Francesca! They spend ages figuring it out when it is literally so obvious who it is that I knew from the moment the first suspicious goings-on began happening. Who is it? Franni! Why? Because she is mentally ill and has created this elaborate delusion that she and Gyles are in love, and he's only marrying Francesca for money, and he secretly wants Franni to kill Francesca for him.

It's getting late over here, so let me sum up some of the key issues I took with this book.

Gyles is an idiot asslord. His reason for wanting a loveless marriage is some sob story where he got hurt (his dad died when he was a child), and he decides loving hurts so he's not going to do it again. So he chooses this super selfish route of marrying one woman and then deciding to take a mistress immediately after making a wedding a proposal.

He's also a rapey asslord. Check out this swoon-worthy line:

If he'd taken her to the ground, no power on earth would have stopped him from taking her - passionately, violently, regardless of the pain he would have caused her (58).

This is after running her down through the woods on his horse. You know, like Frollo does in Hunchback of Notre Dame. (Is Gyles actually Frollo? Is his middle name Claude? I began to seriously wonder.)

Oh, but that's not the end of his charms. My no. He slut-shames, too. Check out this line:

"If you thought [Franni] was me, who did you think I was?"
...
"I thought" - the words were bitten off - "that you were a gypsy. Too consciously well endowed and far too bold to be a young lady." He took a prowling step toward her. "I thought you a bold and eager companion" (125).

Despite Francesca's boldness, she's still a virgin (or was), but the hero is blown away at how amazingly good at sex Francesca is. Unlike many other authors, Laurens attempts to provide an explanation for the heroine's knowledge. Which would be admirable, were it not this reason:

"My parents."
"They taught you?"
"No. I watched....I was an only child....When I was young, my bedroom connected to theirs. They always left the door open, so they would hear if I called. I used to wake and go in...sometimes they didn't...notice. After a while, I'd go back to my bed. I didn't understand, not until later, but I remember" (142).

Congratulations, book. I think that is one of the creepiest things I've read in a romance in a while. And this is coming from someone who can't stay away from 70s bodice rippers, so that says something.

Later, they come back to this topic again, like it's an inside joke.

Hmm, I think I have to side with the asslord on this. That's not sheltered. That's just not watching your freaking parents have sex like it's the regency version of Skinemax. Staaaahp.

Then there's the treatment of Franni in this book. She has some sort of mental illness that is unspecified. At first, I thought she was developmentally disabled because everyone made an (annoying) point of talking about how simple and childlike she was (cringe). But then, later, they also say that she has delusions and makes up fantasies that are only half-rooted in reality. And then at the end of the book, it's revealed that this runs in her family: it's a hereditary illness that only affects the women in the family and usually only after they turn twenty. It must be deusexmachinitus.

Anyway, whatever she has, the way it was portrayed did not really sit well with me. Gyles calls her biddable when he thinks she's Francesca, and says she's the perfect "cipher." Which I just looked up, and it appears to mean "nonentity." So he's basically saying that she's this inconsequential thing who will not impede upon his ambitions. Francesca is no better, talking down to her cousin like a child, always describing her as childlike and blank.

She was neither cloying nor snide; she displayed none of the usual behaviors he deplored. His aversion was primitive, instinctive - not easy to explain (249).

"I'd be tempted to say she's softheaded, or to use a vulgar but appropriate term, dicked in the nob, yet that's not quite it. She's perfectly lucid if a bit simple..." (262)

Since this is, what, the seventh book in the series, I thought that maybe I just caught the series on the downward trend. It's hard to keep a book series going strong, especially once you get past book #4 or so. But then I checked out reviews of the first book and happened to see my friend Daniella's review of the first book, DEVIL'S BRIDE. So many of the things I took issue with, like a crazy amount of sex scenes, inconsistent characterization, and yes, even adultery (or cheating, I suppose, since it wasn't technically adultery yet at this point) are all present in her review.

I was not a fan of ALL ABOUT PASSION. The mistaken identity thing was done fairly poorly, but I was still on board for all the love-to-hate-you UST until they started going at it nonstop and all their relationship tension started to come from "to have adultery or to not have adultery?"-type dilemmas. I was also not really happy with how Franni was portrayed, nor that she was mentally ill and that her being mentally ill was the premise for her wanting to kill the heroine Hand that Rocks the Cradle-style. She even hires some men to take Francesca away, where it is implied that Francesca will probably be held in captivity and raped until her baby is born (forgot to mention she's pregnant at this point), at which point the baby will be brought to Franni to raise (since her aunt told her she isn't allowed to have children because she's mentally ill) with Gyles. I thought that was really messed-up (and also inconsistent because if Franni is too "simple" to walk around by herself, how the hell would she think to go out and hire a bunch of criminals, trick Francesca into meeting her, and execute this plan?), and it didn't mesh well with all the other stuff was going on. Also, making the villains mentally ill is a trope that has been done to death, and really ought to stop. I thought about giving this book a one-star review, but I managed to read it in just under two days. It was so hypnotically bad that I was unable to put it down. I had to see what happened next. That ought to count for something.