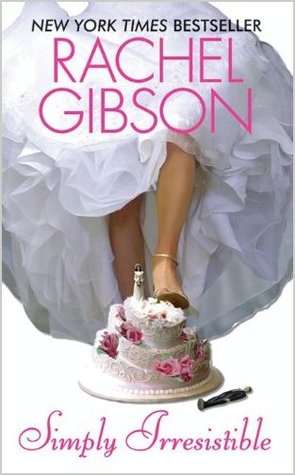 I went through a chick-lit phrase during my first two years of college, during which time I devoured any book I could find as long as it had a pink cover. One of these books was called LOLA CARLYLE REVEALS ALL by Rachel Gibson. I barely remember what the book was about, only that the experience of reading it was surreal...and not necessarily in a good way.

SIMPLY IRRESISTIBLE is also surreal...and not necessarily in a good way. It actually kind of reminds me of IT HAD TO BE YOU by Susan Elizabeth Phillips in many ways, which was another sports themed chick-lit/romance crossover book from the 1990s that I read recently and had issues with.

Our heroine, Georgeanne, is a Texas belle engaged to be married to the manager of the Chinooks hockey team. No longer content to be a trophy wife to an older man, however, she jilts him at the altar and convinces a man from the wedding to spirit her away in his car. That man is John, a player on said manager's hockey team. As soon as he realizes who he has in the car, he begins freaking out, but Georgeanne browbeats him into letting her stay at his place.

Georgeanne falls for him immediately, and is hurt when the next day after The Boink, he puts her in a car with a plane ticket back to Texas. Georgeanne doesn't want to go back to Texas, though, and stays in Washington instead. Where she gets a job working as a caterer. And, oh, yes, is pregnant.

Spoiler alert: She neglects to inform the father.

This is where I began to feel trepidation, because I do not enjoy the secret baby trope at all.

But hey, that's okay. Maybe this will be the time that I will be proven wrong.

Spoiler alert: Some people are born to dogs. Others have dogs thrust upon them.

There is so much fighting, most of it about Lexie. And while I can't really understand personally how difficult custody is, I can certainly understand the reasons behind why this is such an emotionally charged issue. That said, I felt like Georgeanne was incredibly unfair to John about his daughter, especially when she pretty much refused to let him pay for insurance and tuition out of spite. That felt so selfish, like she was taking her own feelings of insecurity and her desire to be independent out on her daughter.

For the most part, I liked the scenes of John interacting with his daughter except for one, when he says she looks like a slut. "He stared at his little girl, looking like a tart in heavy makeup..." (40%). That line just felt so unnecessary, and I couldn't like him as much after reading that.

Georgeanne's relationship with her daughter was way worse, because of how she was projecting all her insecurities in front of her daughter. For example, she is constantly calling herself fat in front of her daughter (and other people). Georgeanne is 5'10" and weighs 140 pounds (and she's curvy, because you will hear numerous times about how large her fabulous boobs and butt are). Considering how curvy Georgeanne is, that is actually quite skinny. I am 5'10" and I weigh bit more than 140 pounds. I, too, am curvy - but I'm also in ok shape, and despite my weight, would not call myself fat. So it was annoying to me to keep seeing these measurements bandied about and hear about how fat Georgeanne is, especially when it was clear that she was doing it in front of an impressionable child.

Even though John and Lexie were cute together, he's definitely borderline-alphahole with everyone else, talking about how he doesn't sleep with "skinny" women (oh boy, more body shaming), doesn't find "skinny" women attractive, that he's at least partially only interested in Georgeanne because of her body, etc. He also threatens to beat up other men, and uses "retarded," "pussy," and "sissy."

He wasn't as bad as Hugh, though - the secondary love interest for Georgeanne's friend, Mae, who acts like an aggressive pickup artist. Even Mae herself admits that the reason she went out with him in the first place was exhaustion from too many no's.

From a technical note, there was some odd formatting going on in this e-book (I have the Kindle version). There are no breaks between POV swaps, which interrupts continuity, and sometimes the same thing happens with dialogue tags. One person will be talking, there will be a description of something going on in the background, and in the same paragraph, Gibson would have someone else talking. This could make it difficult to figure out who was saying what at times.

Also, typos and random hyphens. The funniest one I saw was a misspelling of Georgeanne's name on p. 274: "Georgeajine."

SIMPLY IRRESISTIBLE is dated, and I would say that for me at least, it doesn't stand the test of time. Not even ironically. As with IT HAD TO BE YOU, there were just too many issues with the book that kept me from enjoying it fully, even if it was almost compulsively readable, and it didn't help that there wasn't a single character in here who really spoke to me. I appreciated Georgeanne's struggle as a single mom and how she had dyslexia, and I thought Mae's drag queen friends were cool (although the story about her brother was sad), and I liked John's interactions with his kid. It just wasn't enough for them to feel developed and interesting.