A Hedonist in the Cellar: Adventures in Wine by Jay McInery 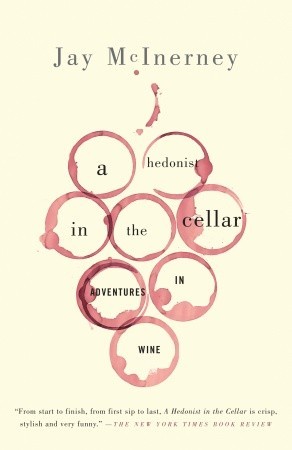 When I was younger, I didn't like wine. My young adult self took great pride in the dropped jaws that ensued when I said, smugly, "I don't like wine." Not even white? "Ew, no." That smugness quickly disappeared when the listener inevitably, equally smugly, said, "Well, you're too young to appreciate wine. It's an acquired taste." Later, as I got older, I grew to enjoy white wines, but not red. And still, whenever I expressed my preference, I received that same smug response: "Well, you're too young to appreciate red wine. It's an acquired taste." Now, I enjoy both red and white wines, so perhaps it was an acquired taste, but let me tell you, nothing is more infuriating than having someone lord their opinions over yours as being superior. Oh, I'm sorry, did I say superior? I meant acquired.

While reading A HEDONIST IN THE CELLAR, I was reminded of those smug people who told me that wine was an "acquired taste." Those people who would pick up a bottle full of liquid that, to me at the time, smelled almost overpoweringly of cleaning solution and would boast about blackberries, and old leather, and stone fruit. McInery writes like someone who thinks that his opinion is better than yours. Perhaps this isn't actually the case; it is quite possible that he is a charming, wonderful person when you're sitting down and having a meal with him (as he does quite frequently apparently with the endless list of famous friends and vintners and restaurateurs - and oh, by the way, did you know that he's friends with author Julian Barnes? Don't worry if you don't; you will be reminded several times - although I can't say I blame him. Julian Barnes is an exceptionally talented author). However, in the book it is constant name-dropping and brand-dropping. Occasionally, he will slip into French. While perusing the reviews, it seems that this affected style of writing is what put off the nay-sayers and I get that.

Here are some passages that I feel best illustrate what I mean:

I have experienced some stunning food-and-wine pairings involving black truffles and Cahors (60).

A few years back I shared a bottle of truffly, rosemary- and Montecristo-scented 1969 wiht Kermit Lynch in the cellar of the domaine and guessed it to be fifteen years younger (69).

The '59 Chambertin that Gagey poured with dinner was still brimming with sweet red fruit and hauntingly complex, somehow reminding me of a Valéry sonnet (130).

The aromatic complexity of a forty-year-old Cheval-Blanc in a great vintage such as '64 or '55 is like a catalog of minor vices: tobaco, menthol, coffee, truffles, and chocolate, to name a few (155).

When I had lunch at the restored sixteenth-century château this past spring with Clarence's granddaughter, Joan, the Duchess of Mouchy... (163)

Sometimes, it honestly felt like you could turn this book about wine into a drinking game. Take a swig from a wine box every time the author says "my friend [famous person]" or "truffles." Only, on second thought, don't do that, because that could definitely cause alcohol poisoning.

However, it wasn't all bad. There were a few chapters I quite liked. Here are some:

The Shedistas of Santa Barbara: talks about some of the small wine producers who can't afford the big, vast, sprawling wineries and vineyards like you see in Napa, and operate out of sheds. I have been to places like these in San Francisco. They are charming but odd (and often have good or at least interesting wine).

The Semi-Obscure Treasures of Alsace: This one is about Alsatian Rieslings, and how they are the "most versatile food wines in the world." Perfect for pairing with spicy Chinese food.

Jilted Lover: This is about Auberon Waugh, Evelyn Waugh's son, and he is basically the Dorothy Parker of wine critics (and, much like Parker, removed from his position for being too incendiary). This book made me want to dig up some of Waugh's writings, and learn more about him.

"A Good and Most Perticular [sic] Taste": In which McInery trolls his friend by pretending to be the wine whisper. It's actually pretty funny.

Bacchanalian Dreambook: This one was nice, too. It's about a Parisian (McInery would probably say Parisien) restaurant that, according to Wikipedia, "contains more than 450,000 bottles [of wine]". Did you hear that choked-up gasp? That was me. The wine list is apparently 400 pages long.

Fish Stories From Le Bernadin: This was another helpful chapter about pairing wine with fish (psssst...Rieslings).

What to Drink with Chocolate: Again, another helpful chapter, and more in line with what I was expecting when I picked up this book in the first place.

The Wild Green Fairy: The last couple chapters are about misc. wines and this one is about absinthe. I thought this was interesting because I tried absinthe for the first time just after I turned 21 (along with several other alcohols. I learned that I liked vodka and rum and the farther tequila and scotch stayed away from me, the better), and it has such a unique taste. I've never had anything quite like it. Absinthe has a bit of a bad rep because of some unfortunate cheap imitations that caused death because of toxic adulterants (namely antimony, I believe).

Also, I loved the shout-out to my buddies Gewürztraminer and Rioja, two delicious but vastly underrated wines. He even gave props to that much-derided pumpkin-spice-latte of wines, rosé. He often referred to it as Bandol wine, but let's be honest. You can call a PSL "that seasonal coffee with cinnamon and cloves," but it won't hide your shame. Let's call a rosé a rosé and own it.

So that concludes my exhaustive rehashing of A HEDONIST IN THE CELLAR. As far as nonfiction about food goes, it wasn't awful. I want to stress that. The writing was excellent: it is accessibility in which it fails. At least for this PSL/rosé-swilling food-plebeian. McInery is writing for a very specific niche demographic, and while this book may resonate for the "acquired taste" folks who not only enjoy but can also afford wines that cost as much as used cars, that isn't something that a lot of us can relate to. But then, who knows? Maybe my thoughts on this style of writing will change in a few years. Maybe this book is an "acquired taste." When I'm rich and famous, I'll be sure to check back.