A Lady's Code of Misconduct by Meredith Duran 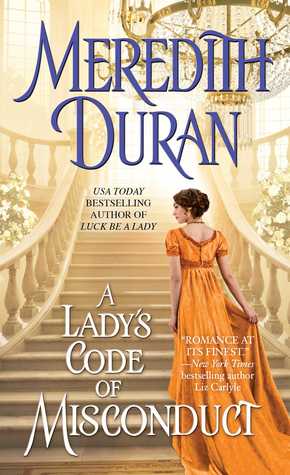 Jane Mason has been imprisoned in her aunt and uncle's household while they slowly embezzle her fortune and plot for a marriage to her cousin in order to keep her vast inheritance in the family. Because of their work, everyone assumes she is simple and shy and safely on the shelf - but beneath her quiet demeanor, she is every inch her politician father's daughter, and betrays her fiery temper one day with an unflattering embroidery of her uncle at a dinner party.

Crispin Burke is a cruel and cold man who will stop at nothing to achieve his ambitions. He sees in Jane what nobody else sees: possibility beyond her wealth. He offers her an escape from her guardians: a dupe of a marriage certificate to any man she chooses, with the provision that she spy for him. Then one day, Burke is attacked and left for dead, and Jane decides what better man to wed than a dead man?

She wasn't expecting him to revive...or that when he would, he would lack any of his previous memories and be someone altogether different.

A LADY'S CODE OF MISCONDUCT combines several of my favorite historical romance tropes into one glorious volume. The shrewish heroine, the cold and dangerous hero, amnesia, political scheming and intrigue, murder plots, and slow-burn romance.

Jane was attracted to Burke before, but only physically. In his altered condition, she finds herself slowly growing attracted to the man he has become - with her. But as she learns more about this new Crispin, she also learns more about the man he was, and how he become as cold as hard as he did, and she starts to develop a solid understanding of the gestalt of him in a way that no one else has.

I loved Crispin's character. Even when he was still acting like a jerk, he was a compelling jerk. When his concussion turned him into a beta hero, at first I was skeptical, but given what we learned about him, and how he was basically set up to fail by his own family and colleagues, it started to make sense why he would strive so hard to better himself for the woman he thought he married for love. Set this against a backdrop of politics, ambitious, and murder, with a hero who is unable to remember the very information that might save him, and you've got a hell of a plot.

I liked Jane in the beginning when she was all fire and sharp tongue, but towards the end of the book she began to be a hypocrite, and spent most of her time lecturing Burke and feeling sorry for herself. It wasn't enough to ruin the book for me, but it did turn what was going to be a five-star read for me into a four-star, as did that rather silly climax (boobytraps? really?). Duran started out very strong in this one and then everything sort of fizzled out.

A LADY'S CODE OF MISCONDUCT works as a standalone and is a solid addition to Duran's repertoire. I don't recommend reading her short stories - they are not good - but the Rules for the Reckless series is good fun, and features no-nonsense heroines and secretly-nice-jerk heroes. If you're into that, and don't mind a bit of cheese, I highly recommend them!