You Can't Touch My Hair: And Other Things I Still Have to Explain by Phoebe Robinson 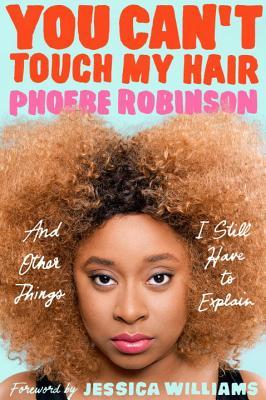 I just read Amy Schumer's GIRL WITH THE LOWER BACK TATTOO, and if you follow me, you'll remember that I had some complaints. Mainly that comedians, for whatever reason, write unfunny memoirs that are either a) self-promotional, b) long, shopping lists of gratitude, or c) boring & dry. It's like they have to prove a point - that they're not just the funny man or woman, they can be serious, just you watch. But...that's not why people are going to buy your memoirs. It's not why I buy your memoirs.

Phoebe Robinson's memoir is not like that at all. It opens with the history and the politics of "natural" hair and why it's rude to ask to touch it. Robinson discusses how different hairstyles can make a statement if you're a woman of color, the hours and effort that go into maintaining natural hair, and the frustration she and other women feel when they are othered based on their appearance.

After this, as a bit of a wind down, she discusses some of the famous (black) celebrities who contributed to the pop cultural lexicon of black hairstyles. This section includes pictures and commentary, and I really enjoyed seeing the evolving looks.

The middle section is a bit about Phoebe herself, and some of the things she loves, as a sort of belated meet-cute before she gets into the heavy stuff. Try not falling for this woman, I dare you. She's so charming, and funny, and self-effacing. She drops pop culture references and slang like a pro, and her voice is so strong that you really get the feeling that you're having a dialogue with her - right now.It can be surprisingly difficult to capture a "voice" on paper, and she does it really, really well.

After the meet-cute, Phoebe gets into the Deep Stuff. Race. Stereotypes. Bigotry. Guilt. Othering. Coded language. Privilege. The stuff that will send a small population running for the hills (or their laptops), screaming about rabid SJWs. But Phoebe discusses these topics in a really great way, supporting her points with examples that help give you an idea of what she feels and why when people use insensitive words like "exotic", "urban", or "uppity", or why she got so angry when a woman burst into tears after Phoebe was forced to read aloud and then later criticized her offensive lesbian master/slave love story and claimed that she - a white college student - felt "picked on."

Phoebe gets right to the point. Even now, decades after the civil rights movement and about a century after the end of slavery, we are still pretty damn discriminatory as a society. And discrimination doesn't have to be overt. You don't have to say the N-word to discriminate. Discrimination can be as implicit as designing camera film for white skin, treating your black friend like they're the ambassador for all people of color, or only carrying lighter shades of foundation at a drug store. Buzzfeed did a few role reversal videos (1, 2) that help illustrate what things look like from the outside the privilege zone, but the fact that it feels so ridiculous just goes to show how heavily integrated such stereotypes are within the structure of society, and why we still need change.

The book ends with Phoebe writing a series of letters to her young niece about what it means to be black, biracial, and a woman, and the importance of being an authentic, compassionate individual who is open to new experiences but also not afraid to stand up for her principles. She brings up some more great points, too, but after the previous section, it feels a bit anticlimactic. I can see why Phoebe chose to end her book this way, though. You don't want to leave your readers on a note of moral outrage (for better, or for worse), and it helps bring the memoir full circle, as Phoebe starts out talking about the politics of the parts of the individual, and ends with the politics of the whole article.

This is probably one of my top 5 favorite female memoirs, ranking right up there with Felicia Day's YOU'RE NEVER WEIRD ON THE INTERNET and Tina Fey's BOSSYPANTS. It made me cry out, "I relate to that!" "I am interested in that!" "I am outraged by that!" and "I want to be your friend!" by turns. I love memoirs that are passionate, and political, and energized, and this book was all of those things. It was also thought-provoking, and honest in a way that a lot of memoirs these days aren't (I think you've probably heard me complain that too many celebrity memoirs are too "nice"; nice is nice, but it isn't controversial and it doesn't make a statement and it doesn't get you talking, either).

I loved that. And I love Phoebe. (And now I'm off to check out her comedy and stalk her on Twitter.)

Thank you so much, Netgalley, for the free copy!