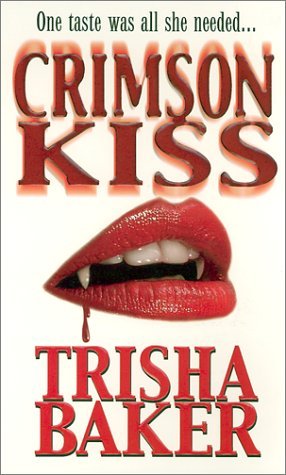 Initially, I was really into CRIMSON KISS. It's the perfect fall read, a 90s story about vampires that fits perfectly into the niche pre-TWILIGHT vampire cannon. You can easily imagine a Goth adolescent curled up with this book in a pre-commercialized Starbucks while nursing a black Americano as the leaves and rain swirl past the window and Nirvana plays moodily over the speakers.

The structure of this book is very odd. It starts out in the "present" (1998), before reverting to the mid-40s. We're introduced to a teenage Meghann O'Neal, her loving Irish family, WWII war hero fiance, her hopes, her dreams. She meets a charming man named Simon Baldevar at a party who threatens to sweep her off her feet. She knows she shouldn't spend time with him because she's engaged, but can't seem to help herself. After a night spent painting the town red (pun unintended, actually), Simon declares himself in love with her and all but demands that his feelings be reciprocated.

Meghann falls for Simon, and that's when the romance ends and the nightmare begins. Oh, we already know that Simon's a vampire - but did you also know that he's a demented psychopath who likes torture, kink, and human misery? Neither did Meghann. But Simon immediately sets to weaving a web of psychological manipulation and, later, physical abuse, to trap Meghann permanently in his clutches and put her completely under his control. I was shocked at the amount of sexual and physical violence in this book, as well as how uncomfortably convincing the abusive relationship dynamic feels.

Back in the "present", Meghann is free and in a relationship with a human vampire slayer who also has a bone to pick with Simon. She has friends, a new mentor, and a Simon-sized chip on her shoulder. All of them have their own reasons for wanting Simon dead, but he's far more powerful than any of them had ever dreamed, and the cost of defeating him might be more than they can afford.

CRIMSON KISS follows the typical vampire mythos pretty straightforwardly. Dual timelines, Gothic settings, and lots of angst and existential musings create the backdrop and set the scene for CRIMSON. The execution is what causes this book to stand on its own two feet. Simon is a very bad man. The things he did shocked me, and made me sick to my stomach. He is scary. And Baker's very good at deceiving the reader so we get deceived right along with Meghann. This makes it easier to forgive when she falls for his tricks again and again, when she refuses to leave or give up her feelings for her abuser, or when she finds herself giving into him (sigh) yet again.

The other characters aren't quite as fleshed out as Meghann and Simon, but I did like Alcuin and Charles a lot. Jimmy, I liked less, but certain events at the end of the book suggest that he might meet with some interesting developments in the sequels. The evil villain and the gloom-and-doom atmosphere are what really drive this story forward, though, and Celtic folklore adds some interesting bells and whistles to the magic in this book. It really is the perfect fall read; I think this would be a great vampire book for October. It's creepy, haunting, and morbid. Plus, it's only $2.99 in the Kindle store - and so is the sequel. I mean, how do you beat that?