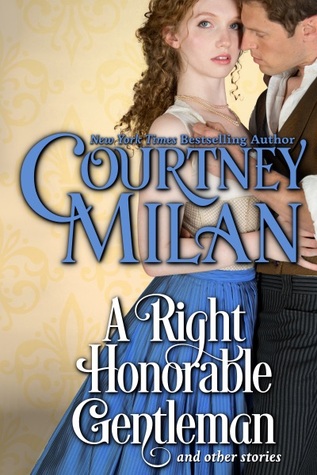 So disclaimer, I got A RIGHT HONORABLE GENTLEMAN for free from the author because I subscribed to her newsletter (I think a "neener, neener, neener" is in order). I was looking forward to this book a lot, but then life got in the way, and I lost the email with my free copy (!) and several weeks after the fact, I'm only just now getting around to it because I am a bad person.

I don't think it's exactly a secret that I like Courtney Milan's work. She's an author - a romance author - who takes a lot of risks. I like that she's working to write historical romances about men and women of color, to tell the sides of stories that are often overlooked or white-washed. I like that she tries to include LGBT characters in her historical fiction, for the same reasons; the status quo writes history, and everything else tends to be...well, erased.

A RIGHT HONORABLE GENTLEMAN doesn't have any PoCs in it, but I'm bringing that up because I want to talk about why Milan is a favorite of mine, and why I was so excited to read this book. Another thing she does well are her short stories. I think the last story I read that was under thirty pages was THE INITIATION by Jena Cryer - don't ask (it was a different time, okay - there was loads of free erotica to be had, and I was bored, and my followers are terrible enablers). Honestly, with most other authors, I would have passed, but given what I knew Milan could do in a short time, I said, "Okay, bring it, short-stuff!"

This book is a romance between a governess and the head of the household (I believe he's Chancellor of the Exchequer?). He's a hard-ass, for lack of a better word, living a severe life, ruling his household with an iron hand, and sending his help scurrying for the shadows from the moment he darkens the front step in a cloud of ill-humor. Even though Cat's duties are primarily with his son, she isn't afraid to keep his father in line, either, reminding him with a kind but stern word that he should ease up on the staff and make sure his son learns how to treat those who are in his employ right.

As stories like this go, the two feel more for each other than an employer and an employee should, and Cat decides, for the sake of honor, that it's best for her to leave in a state of grace. Edward does not like that one bit, and thinks he can cow her into obeying him the way he does his staff. But he is wrong. And when he realizes why he's wrong, he panics, because he thinks he's driven her away forever with his harsh and stubborn ways.

A RIGHT HONORABLE GENTLEMAN is a very sweet story, and romantic despite the utter lack of sexual content. I said before that I'm impressed with what Milan can do in a short amount of pages, and that sentiment holds true here, too. That said, I feel like this story was too short, even for me, even for Milan. It felt like I was reading the last chapter of a very long (but good) story, and it left me wondering, "What happened before? Where's the character development? The gradual dawning awareness of love?" Looking through the reviews, I noticed that I was not the only person who felt this way. I'm a sucker for a good governess story. I would have loved this as a novel!

This wasn't a bad book, but she has so many better books under her belt that I really can't rate it anything higher than a two because of how it compares to her other works. I'm a bit biased because I got this book for free. I think if I shelled out money for a book just shy of 30 pages and ended up with A RIGHT HONORABLE GENTLEMAN, I'd be very disappointed, so I kept that in mind, as well.