The Palace by Chelsea Quinn Yarbro 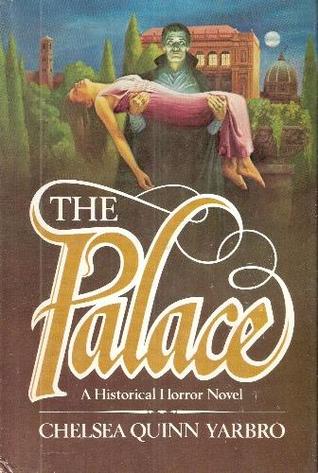 When reading Yarbro's work, it's hard not to compare her with Anne Rice (even though I'm sure she tires of such comparisons). Both are best known for their vampire-themed historical fiction and the series debuted remarkably close together, with The Vampire Chronicles being published in 1976 and Saint-Germain being published in 1978. (Which surprised me. For some reason I'd been under the impression that Yarbro's work came first (and this is why you should look at original publication dates and not go by what your late-80s mass paperback tells you, JSYK).)

I've read selections from both series, and I have to say that Saint-Germain is the (most consistently) better of the two. Oh, Saint-Germaine gets off to a rough start with HOTEL TRANSYLVANIA, which has uneven pacing, some uncomfortable situations, and a wince-inducingly perfect hero capable of garnering a perfect score on the Gary Stu litmus test, but the series really gains strength as it goes on, and despite being over three decades old, the newer books are still good, if not better, than the earlier books.

Saint-Germain's character is based off the historical figure, The Comte of St. Germain, which is fascinating because he apparently claimed that he was 500 years old. Yarbro runs with that, making Francesco Ragoczy (Count St. Germain) a vampire who dates his origin back to the times of Ancient Rome. Like his historical counterpart, this Ragoczy also dabbles in the occult and alchemy, and Yarbro makes good use of vampire lore - he walks around in shoes filled with his native earth which protects him from the sun and allows him to cross running water; he can only be killed by fire, beheading, or crushed spine; he can create others of his kind by the sharing of blood, etc.

Each Ragoczy novel can be read as a standalone, as they jump around in the timeline and apart from sharing the same mythos, don't have a linear format. I've read books that took place during WWII, WWI, early Italian Renaissance, and mid-Italian Renaissance (she really seems to like Renaissance Italy), and the next one I have takes place in "Nero's Rome." This is a really appealing system, because I don't have to worry about series order, and I can read the books in the order I acquire them without crying over missing or skipped books. Compare that to the lunacy that is Anne McCaffrey's Dragonriders series, where it isn't enough to read chronologically - there's a wonky series order that matters if you want to have the correctly executed Pern experience. No thanks!

THE PALACE takes place in mid-Renaissance Italy, in the late 15th century. A Borgia is Pope, and Savonarola is stirring up Florence with his religious fervor, inducing people to make bonfires of the vanities, burning art, sculpture, and books; heading religious-inquisitions; and helping to put a stop to the courtly grace and aesthetic beauty of Medici Florence. I tell you, when they burned Boticelli's paintings, it hurt on a spiritual level. There's a great quote in here that Ragoczy says about art:

"[Destroying art]...[is] worse than killing children, because children at least can defend themselves. But art, art goes into the world unarmed, vulnerable to every quirk of fate, and it must survive only by its power to move men not to destroy it" (273).

I wouldn't call these novels romances - I wouldn't call them "horror", either, despite the tagline "a historical horror novel" on my gloriously bad edition from the 70s - but they often feature romance. Ragoczy, being a man eternal, has a couple "kept" women he's turned over the years, but they are independent and their relationships with R usually turn platonic after they become vampires as well. Ragoczy can't have sex the normal way - that is, no peen action. He does other stuff, instead, which is sometimes frustrating for his lovers, but he insists. I've read four of these books now and I'm still not 100% sure why - although I suspect it's because he has a magical peen that turns people into vampires. He has two lovers in this book: one crazy, one sane. I'll let you figure out which is which.

THE PALACE was a slow read for me. Yarbro has a tendency to describe everything, especially food and what Ragoczy is wearing. If you're a fan of historical fashion, you are going to love this book because of the clothes-porn alone. I can only imagine how many hours of research went into this book for the author to describe the ensembles in such meticulous detail, but Hollywood fashion reporters can only read this and weep in envy and awe as Yarbro fluffs these piffling details into long paragraphs with detail and flair, somehow without making it seem utterly boring, too.

The Saint-Germain series is not really light reading because there are a lot of characters and details to follow, and the history parts of the books can be dense. Also, Ragoczy likes writing letters and receiving letters a lot, so a significant portion of the book is written in epistolary format, which only adds to the challenge. That said, if you're willing to put in the effort of diving in and enjoy vampires (and history), I think you'll really appreciate this author. She clearly has a passion for her work, and I can honestly say that I have yet to find a vampire series that matches this one in scope.