The Devil's Love by Lane Harris 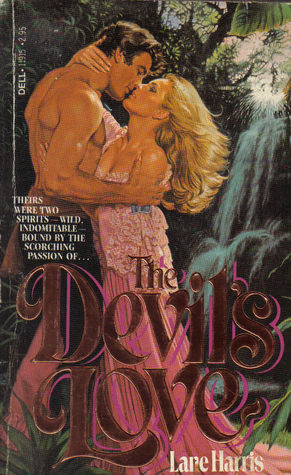 THE DEVIL'S LOVE can almost be summed up by simply reciting the tropes it contains. Set in the late 18th century, the story is about Christina Evrion, the daughter of a shipping merchant on a Caribbean island, and Kade Renault, the banished son of a Scottish Earl (why was he banished? because he couldn't keep his hands off the wimminfolk, obviously, and liked to do pirate-y things). The hero actually encounters the heroine for the first time when she's a very young teenager, when he espies her nude bathing with her half-black servant. He vows to tap that the next time he visits the island.

Meanwhile, Christina grows into the island beauty. Her doting but absent father humors her, and she is a lot smarter than her wicked stepmother, so she basically has the run of the place and has grown into quite the wild child. She has a rivalry with the other island beauty, Carlotta, and often steals her men away from her just to prove to herself that she can.

When Kade comes back to the island, both women find him attractive, but Christina wants nothing to do with him - and obviously, it's Christina he wants. He attempts to force his attentions on her several times, but is always rebuffed angrily...which only makes him want her more. Her father ends up dying, effectively leaving her an orphan since her stepmother, Hilda, wants nothing to do with her. However, there's a clause in the will that says that she won't control her inheritance unless she marries, and Hilda, who hates her, is determined to marry her off to the worst people possible because she wants her step-daughter to be as miserable as possible. So naturally, she finds the resident opportunistic gay man on the island, who wants to marry Christina for her money and nothing else. It's interesting because part of the reason Hilda hates Christina so much is because Christina reminds her of a cousin she was jealous of as a child...a cousin that she basically watched die. Also, Christina's father doesn't love her, says Christina's mom's name during sex, and has all sorts of affairs.

Since Kade knows Christina wants her independence, financial and otherwise, from her wicked stepmother, he tricks her into thinking that she is marrying him on the eve of his own execution so she can have his last name (and therefore, independence as a widow). They propose this deal while he's being held in chains by the Spanish, and the heroine taunts him, sexually, by giving him a serious case of blue balls and then leaving a "C" written in his chest hair, all Zorro-like. Little does she know that it's all a big sham... First order of business is kicking out her stepmother, who vows that Christina doesn't deserve to be happy.

Surprise, surprise - Kade doesn't die, and goes back to his pirating ways...and the first item on his list is dat booty. He demands a wedding night, sham marriage or no. I should note that the first couple sections between the h and the H are very rapey. I don't really remember what happens during the first time, apart from the heroine finding it utterly unpleasant - I think there's a lot of "you owe me" blah blah blah - but the second time they actually have a physical fight where she ends up slapping him, and then he decides that he's going to one-up that by raping her. Bodices are actually ripped while they shove each other around the room and somehow all his pants buttons are ripped off.

The heroine is constantly trying to run away from the hero because she's a woman, dammit, and can't be tamed! She's not quite on the TSTL spectrum, but it's close. She makes a lot of unwise decisions. Like dressing in drag to steal about a ship, getting captured by the Spanish, and then getting lost in the middle of the desert where she ends up stepping on and then being bitten by a rattlesnake. Whenever the hero gets mad at her, she infuriates him by suggesting that if he doesn't like it, they can just get a divorce, and she constantly tries to put him into positions where he's tempted to cheat by arranging time so that he is stuck alone with Carlotta, who desperately wants to seduce him.

Then Hilda - the evil stepmother - tries to shoot Christina at a party, but Kade takes the bullet. While he's recovering, Christina decides to run away - to France - in order to get some medicine for the brother of her black servant/friend. While there she stays with her cousins. One of them, Dominique, is a sociopath who enjoys sleeping with women and then dumping them when they get pregnant or clingy. He gambles recklessly and has no empathy at all. One day, he decides it would be a lark to dress up as a highwayman and scare the dickens out of his sisters by pretending to rob them when they come back from a masquerade. Christina, luckily, knows how to sword fight, though, and ends up mostly whooping his ass while in drag (because she dressed as a male swashbuckler for the party), and Dominique is humiliated and angry when his sword knocks off her wig and he realizes that "he" is a "she". When he finds out that the girl who humiliated him is his cousin, he decides to rape her in revenge. Flashback to Kade, who discovers that Christina has left him - yet again - and he immediately decides to have revenge-sex with Carlotta, who, conveniently enough, enjoys pain, so he rips off her clothes and has sex with her, even when she tells him to stop, and after leaving all sorts of bruises on her boobs and her body, it's sort of implied that he rapes her in the butt.

Meanwhile, Dominique steals kisses from Christina and plans the rape. It's implied that he's raped his sisters, as well. After two near-rapes in which he succeeds in tearing off her clothes (are all dresses made of tissue paper in this novel?) and molesting her body but not actually raping her (while in the garb of the highwayman, of course), he grows incredibly frustrated, especially when Kade comes back. He finally succeeds at a party by drugging her drink, and then carrying her through a secret passage way through a bookcase into his bedroom, and Christina finds out that he's the highwayman who tried to rape her both those times when she sees a diamond pin that the highwayman stole from her. Dominique then rapes her, and plots doing so many more times, but before he can do so he is shot in the head by one of his ex-lovers, who then kills herself.

Christina finds Carlotta and Kade kissing, tears off Carlotta's dress, and then threatens to cut up her face with a broken bottle she's smashed if she doesn't leave her man alone. Kade gets angry that Christina still won't admit that she loves him, and spanks her because she deserves it. They end up going to Scotland where Kade is now Earl following the death of his brother who inherited. Time starts skipping around a lot, because by this point we're nearing the end of the novel. Christina gets pregnant, and has twins. When she sees Kade holding the babies, she finally realizes she loves him, and they have non-rapey sex for the very first time! It's so romantic...not.

There's probably a lot of other stuff that I'm forgetting and a couple things - like a mad scientist, voodoo, and half-naked dancing in the woods - that I just don't have time to go over. This book was OTT to the max. The author spends an uncomfortable amount of time describing the heroine's perfect breasts and how wonderfully or gracefully they're framed by whatever article of clothing she's wearing at the time, and every time Kade appears, we get to find out exactly how far he's decided to unbutton his shirt, and how thick his chest hair is, and how bronze his chest is. Oh myyyy.

Honestly, though - purple prose aside, the writing is pretty decent, and Lane Harris does a good job at foreshadowing events. Every action has a purpose, and a lot of things come back full circle, which I always appreciate in a book like this - it keeps things interesting. If the sex scenes hadn't been so ridiculous, I might have enjoyed this more than I did. There's actually a passage where the hero starts preaching about how fun it is to suckle nipples, and how this is something that both men and babies understand (seriously - wtf, check out that quote on my updates). And it really annoyed me that the hero keeps calling the heroine things like "kitten" and "tiger" and how a lot of words were repeated over and over again, like how the heroine's "turquoise" eyes "shot sparks" or how everything sensual was described as "velvet."

It probably seems like I didn't like this book, but I did. It was a fun, easy read, and I enjoyed the ride. I'm a bit bummed that the author seems to have written only one book, though. Good bodice rippers are so hard to find...