Can You Keep a Secret? by Sophie Kinsella 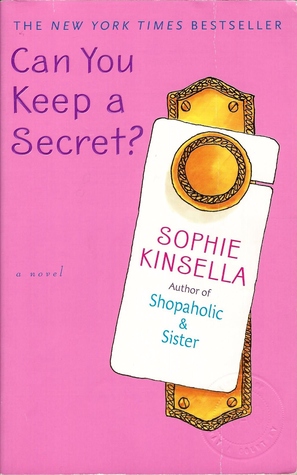 The thing about Sophie Kinsella is that she only really writes one type of heroine - a socially awkward, passive-aggresive flake, whose proclivity for white lies borders on the pathological, and who ends up making you wince when you know that you ought to be laughing.

Sometimes this works. For example, I really enjoyed THE UNDOMESTIC GODDESS, REMEMBER ME? and TWENTIES GIRL (in that order). The first Shopaholic book was okay, but the second made me very angry, because in it, the main character quickly devolved back into her own habits, neatly erasing any character development that occurred in the first book, and making me wonder, "Why am I supposed to give a f*ck, again?"

CAN YOU KEEP A SECRET? is about Emma Corrigan, a girl with lots of "secrets." Secrets is in quotes, because most of her secrets are actually lies. Here are a few samples of Emma's secrets: Emma steals her roommate's expensive designer clothes & then lies about it. Emma tells her work friend that she loves the crochet she makes for her, when in actuality she hates them & throws them away (bitch). Emma wears a size four thong that is super uncomfortable because she lied to her boyfriend about her weight. And so on, and so forth.

One day, she gets on a plane that goes through some severe turbulence. Thinking she's about to die, she confesses all of her "secrets" to her seatmate. Spoiler alert: the plane doesn't crash, and Emma lives to lie another day. She thinks this embarrassing but seemingly harmless incident is behind her, until she sees her seatmate/confessor again...and realizes that he is the man who owns the company where she works. In other words, he's her boss's boss's boss, Jack Harper.

I actually really liked Jack. I thought it was hilarious, how he tortured Emma about her secrets. I laughed out loud at some of these passages. Later on the book, he does something that is, admittedly, rather insensitive, but since I had already decided that I didn't like Emma, it didn't bother me - especially since it triggered another chain of hilarity (at Emma's expense, even better). I also loved Emma's roommate, Jemima (the one Emma steals clothes from). I think I was supposed to dislike her, but dear lord, she was funny, and so much more interesting than Emma. And her "Mummy"! I loved Jemima's Mummy's advice about men - she is so deliciously evil. It kind of bothered me how casual Emma and Lissy were about breaking into Jemima's room and stealing her stuff, even though she told them not to; I wouldn't want anyone using my things, either. And since this was an act of stealth, they obviously weren't washing them after! Gross and a total invasion of privacy.

That's actually the meat and potatoes of my dislike for this book - Emma was not a sympathetic protagonist. I could understand if she was meant to be unsympathetic or if she was the "before" to a redemption arc (Marian Keyes does this to great effect), but no, we're supposed to embrace and relate to Emma as the every girl. She was very whiny and self-centered and immature, and I could not relate to her, at all! I mean her reason for why she should get a promotion is "I'll wear smart suits!"

As if the author knows how dislikable Emma is, the villains in this book are almost cartoonish caricatures of villany designed to make the protagonist seem sympathetic in comparison. Take Kerry, Emma's cousin, and family favorite, who is so oily and repulsive that you would probably see her picture under the dictionary definition of "smug." Or Artemis, who is basically Jemima, without the sagacious "mean girl" wisdom. She's just a mean girl without the subtlety.

CAN YOU KEEP A SECRET? is not the worst Sophie Kinsella book I've read (SHOPAHOLIC TAKES MANHATTAN receives that honor), but it is far from being the best. The three books I mentioned in the second paragraph of this review are all much, much better. If you're new to this author I'd recommend starting with them.