Be Not Afraid by Alyssa Cole 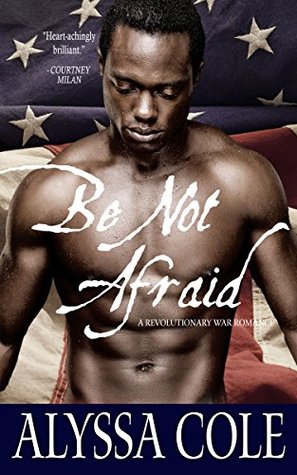 There really aren't a lot of popular historical romance books that deal with people of color. The only two authors who come to mind who do this consistently are Courtney Milan and Beverly Jenkins. So finding a book set amidst the backdrop of the Revolutionary War from the perspective of two African Americans was a pleasant surprise.

Elijah is a slave working for his Colonist master, who says he will free him and give him land if he fights in his stead. Kate, on the other hand, works for the Red Coats, because the Crown has said it will give runaway slaves freedom if they fight against the Colonists in the Revolution. The two end up crossing paths over a murder, of all things, and when Elijah is taken prisoner by the men in Kate's regiment, both try to resist their feelings for one another.

BE NOT AFRAID is a very short book. The horrors of slavery and war are alluded to, instead of being spelled out in explicit detail. The upside is that people who are sensitive to such material could probably read this book without being triggered. The downside is that because it's mentioned in passing, it feels overly casual. Kate got over her trust issues very quickly! And while I get that this was a necessity given the length of the book, it did not do the story line any favors.

60 pages really isn't much time to set a stage and develop characters. Kate and Elijah's attraction comes across as insta-lust more than anything else. I could feel for Kate and why she didn't trust men, and I could appreciate Elijah's unwavering loyalty to the country that enslaved him because he wanted something better for his countrymen and his fellow slaves, but I was told these things, and it would have been cool to see their characters grow and develop over the course of a full length novel instead of this fleeting introduction, hastily wrapped up conclusion, and neat epilogue.

I would read a full length novel by this author, but I'm not sure that I would try another one of her short stories.