Her Every Wish by Courtney Milan 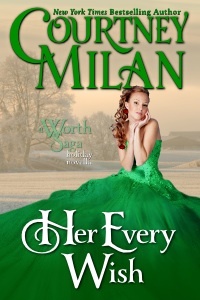 This is a wonderful, redeeming love story for anyone who has ever felt like they were somehow less because of their gender, sexuality, ethnicity - or any other factor that they couldn't control.

Daisy Whitlaw is poor. She lives alone with her sick mother, struggling to make ends meet for the two of them. Her current pipe dream is the idea of starting her own store, Daisy's Emporium. But when she enters a contest in the newspaper for a business proposal, she is ruthlessly shamed by all the men there when they realize a woman is in their midst. They treat her so badly that I almost cried because of how relevant some of those comments still are today.

Crash is also treated terribly by others. He's part black, part Indian, and possibly French/Portuguese/Chinese (his mother wasn't sure who his real father was). He's also bisexual and, like Daisy, poor. He has a dream of starting his own business as well, but nobody really respects him. Even the women who find him attractive keep trying to find ways to "fix" him, and Crash has absolutely zero interest in being fixed; he wants to be happy with who he is.

Daisy and Crash used to be in love years ago, but a falling out over a misunderstanding drove the two apart. Now their shared ambition puts them together again years later. I think I've said in another review that I don't normally like second-chance romances, but HER EVERY WISH was beautiful, because their relationship was based on shared experiences, mutual understanding, and wanting the other person to be happy. Their banter was excellent, and I highlighted every quote of theirs that made me want to cry tears of joy, this entire book would be bright, sunshine-yellow.

One of the things I love about Milan's books is the attention she pays to her side characters, as well - and it passes the Bechdel test. The female characters in this book worry about far greater things than who will escort them in their season. The friendship between Judith and Daisy was lovely. Crash's relationship with his aunt and her friends made me guffaw. I also liked how Milan showed that sometimes the people who care about us can hurt us the most, because their worries can be founded in biases that they could be blind to, and their obliviousness makes it all the more cutting.

I would definitely recommend Courtney Milan to anyone who likes their romances with feminism, diversity, banter, and wit. I'm already scheming to get my hands on the other books in this series.