The Curse of Lord Stanstead by Mia Marlowe 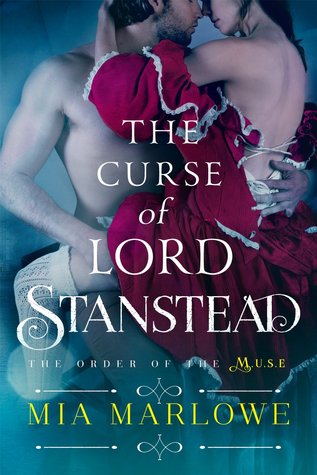 Buddy read with the folks at Unapologetic Romance Readers!

If you are looking for a review about why this book is good, I strongly urge you to check out Elyse's review at Smart Bitches, Trashy books. She covers all the reasons why someone might enjoy reading THE CURSE OF LORD STANSTEAD, and she does it quite persuasively (it certainly worked on me).

This review will not be an assessment of the books charms, however. I found THE CURSE OF LORD STANSTEAD to be an incredibly frustrating read, because it had a lot of potential but to me, this potential did not seem fully realized. The result is a mishmash of a classically bad romance novel and an X-Men/League of Extraordinary Gentlemen hybrid that doesn't seem to know what it wants to do with itself. Should it focus unapologetically on the sex? Or should it make a token effort at world building and secret societies? WWKWD? (WWKWD = What Would Kathleen Woodiwiss do? And the answer is, focus unapologetically on the sex.)

THE CURSE OF LORD STANSTEAD is about Cassandra Darkin, a plain Jane who is suffering because she gave up her virginity to a man who is about to marry someone else. She is also a fire elemental, and is unaware of her awesome powers beginning to manifest themselves beyond a vague sort of awareness that lots of accidents seem to happen when she is around. Garret Sterling is a psychic and a member of The Order of M.U.S.E., a group of individuals who exhibit extrasensory abilities (rather like X-Men) & want to use these powers for the benefit of society as well as recruiting new members. Right now, they have their eye on Cassie, because they know that without intervention, she will go on a warpath of destruction that she will be powerless to stop.

The problem is that fire magic is apparently controlled through sex. Lots and lots of sex. And the group decides that the best candidate for the job is Garret. In case this pimping out of their members weren't icky enough, one of the female members of M.U.S.E., Vesta, who is also a fire mage and (I believe) one of Garret's ex-lovers, gets really involved in the process, giving Garret detailed instructions about what he should and shouldn't do when he and Cassandra bone. It also bothered me that Garret keeps trying to use his powers on Cassandra to influence her during sex. They have a Bella/Edward dynamic where she is the only one his powers do not work on (and does this mystify him and make her oh-so-fascinating? but of course), but the fact that he tries at all is creepy, as is the fact that he has sex with her while she is under the influence of a psychotropic aphrodisiac. Also, can we talk about how one of the male characters (not the hero) pretty much tried to kill her and the heroine just brushes it off. Strangling people for not wanting to have sex with you is not okay.

I was also a bit mystified by the world-building and not in a good way. The group's magic powers are described only in terms of what they do. How they manifest, the frequency, and the different kinds aren't really described at all. It also took me a long time to figure out how magic fits into the frame of the world that the author created. Is it commonplace? Or is it a secret? Is it regarded as good - or bad? These are things that would have upheld the structure of the story and also made it more interesting. Also, the villain isn't introduced until the very end of the story, and then everything is over with a scant few chapters later. A sense of conflict and urgency would have been nice.

The last 30% of this book is quite good - I actually began to enjoy the book in earnest, and I was tempted to give this book a two. But then I really thought about the book as a whole, and remembered the first 70% of the book that was so difficult for me to read that I found myself skimming pages at a time, and with regret, I came to the decision that a good end cannot salvage a bad beginning and middle; 30% is not, and never will be, a passing grade.

I will say that this book is being offered for free at the moment, and the writing quality is a major step-up from most freebies. There were passages in here that were downright lovely - it was just hard to appreciate them when I found myself despising Garret for his choices, and fretting about Cassie's for being so...unforgivably stupid. But hey - maybe you will enjoy the book. It is free, after all.