That's What Frenemies Are For by Sophie Littlefield 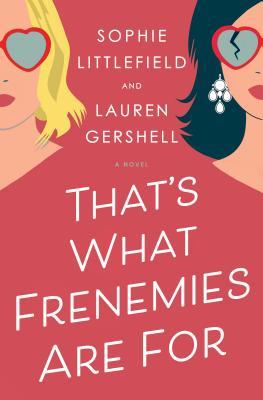 I didn't even realize until recently that "mean girl thrillers" were even a genre, but it seems to be the newest Big Thing in the beach read genre, with books like THE LION'S DEN and PRETTY THINGS that show exactly what can happen when you push the wrong woman too far. THAT'S WHAT FRENEMIES ARE FOR is particularly interesting because in some ways, it's like Lianne Moriarty's take on a Patricia Highsmith novel-- what happens when you're a female Pygmalion and your Galatea makeover project turns on you and bites hard?

That's exactly what happens when trendy New York socialite Julia takes on the awkward but summery Tatum as her protegee. When Julia sees Tatum's spin cycle classes in a gift basket at a charity auction, she sees opportunity. She could make Flame, the studio, the "It" place to be and act like she was the one who discovered it and made it the raging success that it was, while touting her superiority before her equally hateful and competitive friends and flaunting her weight loss. WASPy society girls are the OG "you've probably never even heard of it" hipsters, apparently.

Tatum seems eager for the lessons, and pathetically grateful for all of Julia's "well-meaning" advice and hand-me-downs. Julia loves helping others out if she's seen doing it, and given credit for it. In her world, life is just a constant stream of petty oneupsmanship and endless competition. But pretty soon Julia's perfect life ends up cracking and falling apart, and she discovers in that maelstrom of pieces that Tatum was never really the girl that Julia thought she was: in fact, she might just have fangs. Poisonous ones. Uh-oh. It reminded me a lot of this movie that came out a while ago called Jawbreaker, which takes the cliche of teen makeover movie and ends up becoming a hot mess of betrayal, scandal, lies, and murder. It's one of my favorite teen movies of all time, and Marilyn Manson has a cameo in it!

THAT'S WHAT FRENEMIES ARE FOR has a lot of the same commentary on the toxicity of female friendships and societal expectations for (primarily white) women. At times, reading it could be exhausting because I can't imagine juggling all these lies and endless schemes. It made me wonder, probably naively, whether this is something that people actually do? I was never popular enough, or socially ambitious enough, to get involved in any friendships like... well, these.

Anyone who enjoys mean girl thrillers, as I call them, will enjoy this book, I think. It's a light beach read with some darker, unexpected twists and even if it can be farfetched, it's a fun story, regardless.