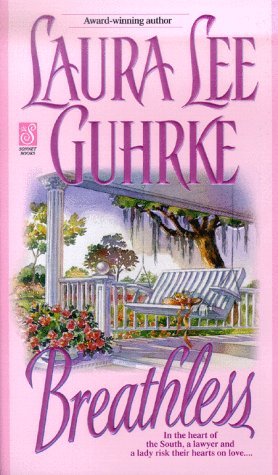 Laura Lee Guhrke is an author who has been recommended to me so many times, but there are so many historical romances out there that look good, it's easy to lose the signal in the noise, and I never tried any of her work until now. Funnily enough, even though I own two of her more popular books in ebook, I started out with one of her out-of-print books that's not really all that well-known. BREATHLESS, unlike her other books, is set in the United States, and not England. In fact, it's set in the United States at the turn of the century, in a post-slavery Georgia. Uh-oh. Well... don't worry. Slavery isn't actually mentioned.

The heroine of the book, Lily, is a librarian and a pariah. Once a socialite who married into a good family, her reputation has since fallen into tatters ever since her ex-husband, Jason, hired his lawyer friend to make her look like an adulteress who pushed him into the arms of the willing women at the local brothel. Lily hates that brothel and has managed to get a judge to close it, which is where the hero comes in. Daniel is the lawyer who smeared Lily's reputation and now has his eye on a seat at the senate. But to do that, a lot of men with money (and women) tied up in the brothel want Daniel to go into the town of Shivaree and make sure the brothel stays open for the good of mankind.

Obviously, sparks fly between Lily and Daniel immediately. She hates his guts, and the way they get back at each other constantly was hilarious and made me laugh a couple times. Although, when Lily manages to rally the women to the cause of the temperance movement and the brothel stays closed, Daniel stops laughing. It was a Lysistrata moment in some ways, especially when the women of Shivaree kick the men out of their homes and refuse to cook them dinner. What with all the fighting over whether the brothel stays open or closed, at first, I thought this was going to be a whores = bad book, and it seems like it is, but BREATHLESS ended up being more thoughtful and progressive than I thought it would be, exploring how the temperance movement let a lot of women feel a taste of political power at a time that they couldn't vote, and how the women working at the brothel are just doing a job-- a job that some of them actually like-- and that doesn't necessarily make them bad people.

What? How progressive of you, 90s romance. *pats sofa* Come sit next to me.

It gets a little weird when the third act of the book introduces a murder mystery element (sad cliche: dead prostitute), and Lily's developmentally disabled friend, Amos, is accused of killing one of the prostitutes (hello, other sad cliche). Then the book becomes a court procedural drama when Daniel ends up representing Lily's friend. The book definitely crosses a lot of genres, and shifts tone a handful of times, and I was a bit disappointed that the mystery element wasn't more ingrained in the story, and that Lily's own involvement in the thriller element turns out to be a red herring at the end.

Slavery isn't really mentioned at all, and there are a few Black characters who are only mentioned a handful of times (all of them servants-- eek). The author gets around the hero having a slave-owning legacy, despite being rich, by having him come from a poor and abusive home. The heroine's wealthy family probably owned slaves, though. Is that mentioned in this book? NOPE. It feels a bit weird to have such a glaring hole in a book set around 1901, at a time when the South was still recovering from the social and economical ramifications of the war, and racism still ran rampant, but I guess just omitting the bad stuff and portraying a "slice" of that Southern way of life is one way of doing things. At least there weren't any wince-worthy racial stereotypes or cliches. And no, I'm not being facetious.

I liked this book a lot, despite it feeling a bit dated and having a few cliches that would probably be frowned at more heavily now. I think if you like Jude Deveraux, you will love this book, as the heroine is a bit of a feminist (but in a way that feels conceivable for the times) and the hero is strong but not abusive or domineering, and the sexual tension between him and Lily could be downright explosive. The commentary on social relationships, accepting people who are different, admitting when first impressions can be wrong and harmful, and loyalty were all solid messages, and I don't think the author did anything particularly offensive or trigger-worthy. So for anyone who loves the vintage vibes of older romances but hates the racism and dated stereotypes, this is a book for you.

I'm definitely bumping the author's other two books up my priority list now!