One Night With His Virgin Mistress byMinori Momoka 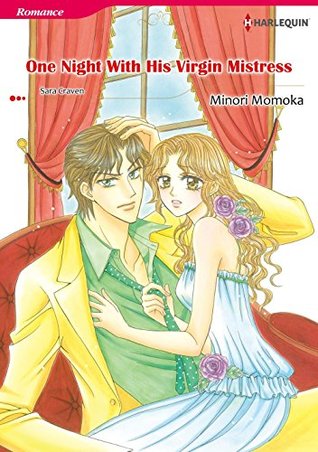 I'm really on a roll with these Sara Craven manga! It turns out I accidentally bought two omnibus collector's editions thinking I was just getting a single book, so that was basically six for the price of two. Whoever said that being a trash can didn't pay off? Just in case you didn't think that romance novels could get any more bite-sized and addicting, some genius had the idea of translating and localizing the manga editions of these works that were selling so well in Japan.

ONE NIGHT WITH HIS VIRGIN MISTRESS is... well, kind of a weird book. It's one of those books, first of all, that tries to be woke by having the hero or heroine involved in "issues abroad," but rather than doing research or risking offense, the author just casually makes up a country. In this case, it's the country of Buleza in Africa. I looked it up just to double-check, but I'm like 99.9% sure the author made that shit up, which is... a choice.

Anyway, the heroine is a romance novelist (the second by this author I've read with such a heroine) who's struggling with her book due to the lack of passion in her personal life. She ends up being accosted (read: assaulted) by the older brother of the shady man who rented her her current place, and it turns out that maybe it wasn't actually available for rent and his motives were even shadier than she anticipated.

I actually glazed over most of the story because I thought it was boring and the art was weird. This is drawn more explicitly than a lot of the manga I read (you actually see nipple), which is kind of icky because it's drawn like it's one of those middle school shoujo manga, so very cutesy, with lots of flowers in the side panels and bubble font, with the hero and the heroine both looking way younger than they actually are. Everyone's of consenting age, but it's still... um. Uncomfortable.

This is not my fave and I really didn't like this style of art, so I can't really give it a good rating.