Daughter from the Dark by Marina Dyachenko 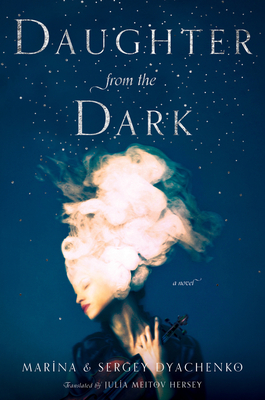 DAUGHTER FROM THE DARK isn't the type of book I normally gravitate to, but I loved the authors' other work, VITA NOSTRA, so much that I resolved that I was going to read whatever else they wrote that was translated into English. It was one of my favorite books that I've read within the last year or so, quickly topping my list of "best fantasy books." So important note for those of you in a similar position: if you've read VITA NOSTRA, don't be fooled by the similar covers: the two books are nothing alike.

VITA NOSTRA is a dark magic school story imbued in metaphysics and suspense. DAUGHTER FROM THE DARK is one of those fantasy horror stories grounded in realism, like Joe Hill and Stephen King's works. The main character is a radio DJ named Aspirin who finds a young girl in an alley. Initially, he's going to leave her, but he goes back and takes her with him to spend the night at his apartment. It all ends up going horribly wrong. The girl might or might not be human and the teddy bear she has might or might not be a monster.

It isn't possible to say much more about this book without major spoilers, but Alyona, as we later learn she's called, is creepy and manipulative AF. But Aspirin is also bad in some ways, too. He's cowardly and he hits Alyona at least once, and he's so used to living his life like a selfish, callous bachelor that he isn't at all equipped to take care of a child, human or no. At one point, when she gets a fever, he's literally just like, "Oh well, so what do I do now?" and goes to the neighbor for help who's shocked that he never even considered aspirin (ironic, considering his stage name LOL). There really isn't much of a plot, either. The story is entirely character driven and moved by the suspense of whether what's happening is real or not and what will happen with the two main characters.

I really liked the beginning of the book but I began to get bored by the end. VITA NOSTRA was really long and I'm glad that this book was shorter, because if they were the same length, I probably would have DNF-ed. The ending was weird and unsatisfying, and a bit of a let-down after spending so much time with these characters. I liked the story and thought it was interesting, but it's not something I would read again, like VITA NOSTRA, and I would be unlikely to tear after someone in the streets, screaming, "YOU NEED TO READ THIS! IT WILL CHANGE YOUR LIFE!" the way some books make me feel. This one is just kind of meh, and that's okay, but considering how much I love-love-loved their other effort, it's a bit disappointing.

That said, I am pretty amazed by how different all their works seem to be. VITA NOSTRA is a book that reminds me of SCHOLOMANCE and POPPY WAR-- an epic fantasy with an academic setting that features an unlikable, and incredibly flawed MC. Their other English-translated work, THE SCAR, appears to be high fantasy-- also featuring a morally grey protagonist. This is urban horror meets suspense, with a dash of magic-realism. It makes me really want to read all of their other works, because they don't seem to be derivative of each other at all, and that makes me want to read more and find out what I'm missing.