Marriage by Deception by Kakuko Shinozaki 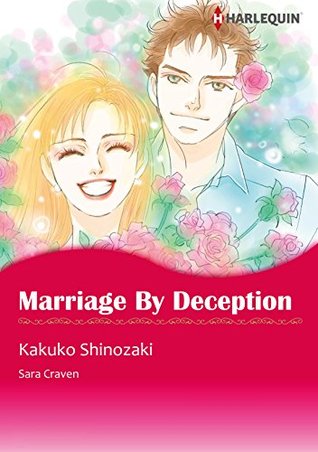 I thought I was only buying one Harlequin manga on sale, but the book I bought (RUTHLESS AWAKENING by Junko Okada) actually turned out to be a three book omnibus edition of manga adaptions from author Sara Craven. Which was super mega cool, because I had already bought the book on sale and I'm pretty sure there's an expression about not looking gift omnibuses (omnibi?) in the mouth... or pages... or whatever. Anyway.

MARRIAGE BY DECEPTION was the last story in the omnibus and that was kind of nice, because it meant ending on a high note, since this is the story that ended up being my fave. It kind of reminded me of How to Lose a Guy in Ten Days (2003), which I recently watched as part of my #LiveTweetThursday project. The hero is writing an article about dating women in personal ads (#dated reference) and his boss is his ex-girlfriend or a woman he turned down (I wasn't sure), who probably has at least one sexual harassment lawsuit pending because she is totes inapropes in the extreme. Anyway, he's writing an article about dating.

The heroine, Ros, is the sister to a flaky but beautiful cosmetics saleswoman who signed up for dating ads to teach her on again, off again guy a lesson. Ros ends up going on one of the dates, even though she has a boyfriend, because I guess she feels bad and doesn't want the guy to be left hanging and also cell phones and maybe not email have been invented yet. So she goes and has a great time and she ends up going on more dates and they end up sleeping together, but also it's okay because her current boyfriend is a momma's boy douche who is self-centered and privileged and also he's cheating on her with his physical therapist, so it turns out that everything is right and trashy in the karmic universe.

Obviously, this does not represent the most functional or healthy relationship in the book (or at all), but I thought the story was fun and the mangaka, did such an amazing job adapting this work and making it appropriate for the manga format. She has a great art style that's unique and lovely, and I'm definitely going to seek out more of her stuff because I enjoyed it so much. It was also surprisingly risque in some of the sex scenes, too, which was interesting, since a lot of them are totally prudish about that lol.

Definitely my favorite in the bunch. :)