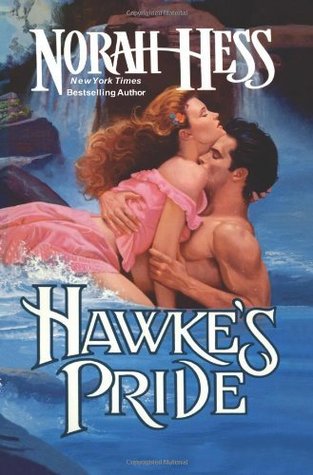 HAWKE'S PRIDE came in one of those romance mystery crates that are all the rage right now and I recognized the name, Norah Hess, immediately, because unlike a lot of bodice-ripper authors, her books have actually been rereleased on Kindle (many with their original covers, bless). This one is currently available in the Kindle store for not too much money and if you have Kindle Unlimited, you can even read it for free. Not that I am biased or anything, but you totes should. In fact, I'm probably going to be in her backlist very soon, click-click-clicking away, because I haven't had this much fun with a Western since reading Kat Martin's DUELING HEARTS.

The cray is strong with this one and it opens with a bang. Our heroine, Rue, is the daughter of a prostitute. One day, her mom takes up with a creepy stepfather type who wants to rape Rue. When he tries, she kicks him in the nads so hard that she ends up rendering him an effectual eunuch. He swears revenge and when the hero, Hawke, stops by, sees an opportunity. Rue's mother is now dead, so she is taking care of her half-siblings and the home, but the money her stepfather can get by selling her into slavery will more than compensate for her loss.

Hawke's married brother died along with his wife, leaving two small children that his elderly father is taking care of. He's moving all three of them to his ranch and needs a housekeeper to help things along. Even though he thinks Rue is a gross hillbilly (she's healing from smallpox when he meets her and is covered in scabs), good help is hard to find. But Rue had just enough time to run to her grandparents and cry at them and her grandfather's idea of helping is to show up with an actual shotgun and force Hawke to marry Rue. In the chaos, the stepfather escapes with the money and his life.

Hawke is an asshole hero in the extreme. He assumes Rue is a whore because of her class and situation and doesn't allow her an attempt to explain herself, OR when he does, assumes she's lying on account of her being such a "slut." Obviously, he's flummoxed and angered when she remembers all this mistreatment once he finds out how hot she is beneath the scabs and refuses to sleep with him. Doesn't she realize what a Studly McStuderson he is? He also has an OW-- a married woman-- who ends up hatching a grand scheme that involves murder and white slavery, which puts her up there with the Catherine Coulter and Bertrice Small OWs in terms of Being Evol for the Sake of Evol.

The sex scenes in this book are pretty smutty. Oral sex??? In a 90s bodice-ripper? Pretty kinky. There are also quite a few of them once they start happening. Negative PC points for extremely questionable portrayal of Native Americans (one of them is described as having a "flat face" and the world "noble" is used), although considering some of the Native American romance novels I've read from this era, Hess comes across as being downright progressive. She gives the characters personalities and narrative arcs rather than reducing them to props, and it isn't quite as icky as it could have been. So yay?

Also, you know, most of the women in this book are evil, the hero doesn't really feel all that bad about his treatment of the heroine until he finds out she's a virgin, and everyone who meets the heroine wants to fuck her (including her stepfather, who is exceptionally creepy and is described as leering and fat about sixteen million times, just as the OW's sagging boobs are mentioned a ton, because in the Kathleen Woodiwiss school of Bitchcraft and Villainy, ugly = evol).

I still liked it, though. Because I am a garbage can. *flaps lid*