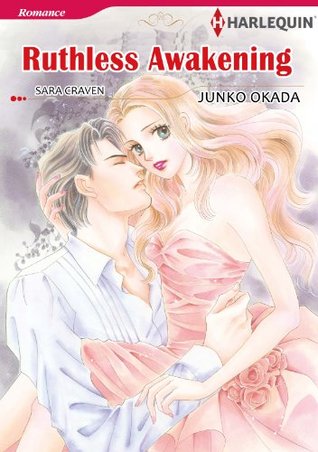 Sara Craven is one of those old skool romance authors who writes the ultra alpha heroes that are complete and utter cads until they find out that the woman they were treating so abominably was innocent in all ways. RUTHLESS AWAKENING is no exception in this school of story-telling. The heroine is an actress who plays villains, but of course, IRL, she's naive and sweet.

She was the daughter of the disgraced housekeeper who allegedly had an affair with the hero's father while the mother was sick with chronic illness, booted out when the pearl-clutching aunt of the family caught the hero putting the moves on her (because of course, it's always the woman's fault *angry eye roll*). Anyway, she's coming back for her friend's wedding and the hero is so sure that she's returned to play the villain IRL and ruin the wedding.

He kidnaps her aboard a yacht on the pretense of celebrating her birthday (jerk), thinking that she's actually having an affair with the groom because of something he overheard and misunderstood. When he tries to force himself on her, and she decides that she likes it, and the two of them go to bed, he realizes (gasp!) she was innocent and covering for her roommate to prevent a scandal, and that sometimes actresses aren't really like the people they play on TV. Whaaaat!

But it gets worse. It turns out his mom was FAKING her terminal illness so she wouldn't have to be physical with her husband, and also SHE was the one having an affair! She just let the heroine's mom's reputation get torn to shreds because it gave her an easy cover for her own indiscretions. *slow clap* Class. Act. But what else would you expect from the matriarch of the Trash Family.

The art in this book is OK, and the story is trashalicious, but I liked it anyway because I am your resident Trash Person who reviews Trash Books online, and harlequin manga novels are just so deliciously fun that I can never resist them, no matter how bad. Honestly, the story kept me entertained and the hero and the heroine had chemistry (even if I questioned the psychological and emotional health of that family, and man, wouldn't want to go to that family reunion). So I'm giving this three stars.

Also, apparently this is an omnibus edition of multiple books and I didn't realize that, so I think I accidentally got myself three HQ manga for the price of one, bundled, which is totes mcgoats awesome.