The Taming of Jessi Rose by Beverly Jenkins 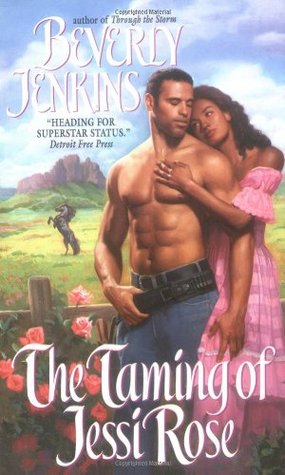 It's been a while since I read a historical romance, and I figured what better way to get back into the groove of things than with Beverly Jenkins, one of my favorite historical romance authors. This is the third book I've read by her and so far none of them have disappointed. She writes strong, empowered women who fight for their dreams, and the caring, powerful men who love them.

Jessi is a fierce tomboy who can ride and shoot better than any man. When her father is killed on their ranch before her eyes, she's determined to get revenge. The killer of the foul deed is the most powerful man in town, Reed Darcy, who wants to bully her into selling her land so it can be sold to the big railroad companies.

Griffin Blake is a train robber who's just been released from prison, and the federal marshal tells him that he can either look into a problematic case as honorary marshal or go back to jail. Something is sour with Reed Darcy's schemes and the marshal wants it solved.

When Griffin arrives, Jessi is under siege by Darcy's men. He helps her out and is impressed by her capability, as well as how protective she is of her nephew, Joth, who she treats like a son. But nobody else in the town of Vale feels the same. Women look at her askance and call her bad names. Men make ribald jokes at her expense. Nobody sells her supplies, and her only friends in town are her old teacher, Gillie, the bartender, Doyle, and the local madam, Auntie.

As Jessi and Griffin grow closer, the stakes for bringing Darcy to task grow higher. Especially since he isn't doing his dirty work alone. His son Roscoe and his wife Minerva are his spies, as well as his hired hands, including the evil and cowardly Percy, who think nothing of shooting out a window or two and threatening a woman and child as they sleep. There's nothing that keeps you turning pages like a villain who's easy to hate, and the villains in this book are ODIOUS.

I liked this book a lot. I loved that it was an African American-founded town in Texas, and the author incorporated SO MUCH INFORMATION about Texas history, African American history, Mexican and Native history, and all sorts of other fun trivia. As you can imagine, all the characters are incredibly diverse. The hero and heroine are both Black and the hero's close friends, Two Shafts and Neil, are biracial (Black and Native ancestry). (He also has a friend called Preacher, who is Black.) My one peeve is that the cover model looks nothing like the hero, who is described as having gold skin and red hair (including a red beard and mustache). The heroine is a much closer match, although she's described as having close-cropped hair in the book and on the cover her hair is long.

This was such an action-packed story and I loved the heroine's strong personality and how the hero slowly won her over (hence the title). One thing that may turn some readers away is the fact that the hero is a playboy who has been with a lot of other women and his past dalliances are mentioned many, many times over the course of the book. The heroine is seven years older than the hero and has been with a few other men herself, which I personally found refreshing. But I know a lot of my friends are safety readers who cannot stomach the idea of H or h (but especially H) having any sort of sexual history brought up apart from the one that they have with each other.

Honestly, the only thing that annoyed me about this book were the sex scenes which were not quite Bertrice Small levels of cheese, but close. If I never see the phrases "love-gentled" or "berry hard" again, I will be very happy, but since I have about eight other Beverly Jenkins books on my kindle, I'm probably going to see them at least a few dozen more times. They were also all very repetitive, and many of them seemed to be exactly the same in terms of how they played out, which made the book feel tedious towards the second half. Which is a shame, because her flirty banter is totally on point and the characters had great chemistry. Luckily, the plot more than made up for it.

Also, both the child and the horses end up safe. You're welcome.