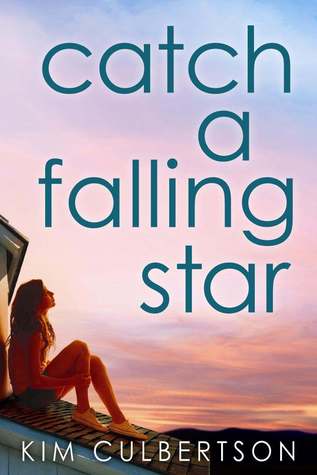 I'm kind of a sucker for the "fake dating" trope, so even though this seemed like it was going to be fluffier than my usual fare, I was like "FAKE DATING?? YAAAAASS." Because I am weak.

CATCH A FALLING STAR is set in a beachside town in California called Little. The type of town where everyone knows everyone's business, and the local celebrities are descendants of the original founders. Until one day, a troupe of real celebrities arrive, to take advantage of the scenic views and quaint Victorian houses for a modern retelling of The Christmas Carol.

Shot in summer. Because of course.

The film's star is named Adam Jakes, a favorite of the tabloids because of his recent messy breakup and stint in rehab. This new movie is supposed to serve as his launchpad from troubled childhood star to serious adult actor. A fact made clear when the heroine, Carter, is cornered by his agent to act as his "fake girlfriend" to show that he really is on the up and up.

Since Carter has a brother who's struggling with an addiction of his own and their family desperately needs the money, she agrees to the job. And it's all fun and games until the lines between real and fake inevitably get blurred and she gets way more invested than she ever wanted, because dating Adam means going out into the big world beyond, and she's afraid to leave the city limits.

I used to read a lot of books like these in high school. Most of them were written by Sarah Dessen and Elizabeth Scott and Deb Caletti because I am old now, but I did once consider myself quite the connoisseur of YA fiction. They're fun, but if you read too many of them, they start to feel a little empty. It's kind of like eating entire bags of potato chips for dinner-- once in a while is okay, but do it everyday straight for a week and you're going to start feeling pretty sick.

CATCH A FALLING STAR does have some surprisingly insightful passages on sacrificing for relationships and what it means to set aside the familiar to pursue your dreams, but it is pure fluff. It's well-written fluff and I enjoyed it, but by the time I finished the story, I'd already half-forgotten it. This is definitely what you'd call a "mood read," and I think if you're in the mood for light and slightly angsty romance, you've found your true calling with this book.