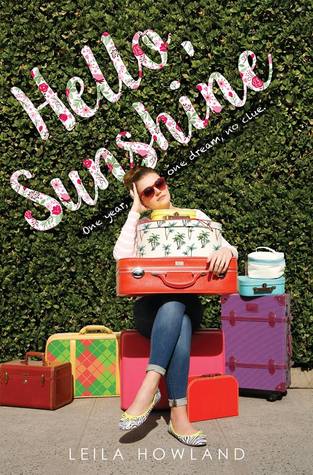 I'm kind of shocked that this doesn't have more reviews or a higher rating because, on the surface at least, it seems to be exactly the kind of book most of my friends are clamoring for. Becca Harrington is coming to Los Angeles to become a star. She arrives there with her preppy New England boyfriend who, while letting her off, drops an "I think we should take a break" bombshell.

With no belongings apart from a single suitcase, no job, no prospects, no car, and no agent, she rents an apartment in the not-the-best part of town and tries to check off her list of goals, ranging from getting her boyfriend, Alex, back, to making it. She quickly makes friends with two people in her complex, another aspiring young actress named Marisol, who is Latinx, and an aspiring director/filmmaker named Raj, who is Indian.

While I feel like part of their relationship does feel a bit "insta-friends," spontaneous connections do happen and I liked how their relationships gradually built out over time, becoming less awkward, so I'll give that a pass. Becca also has a creep in her complex that she nicknames "Oh Fucky," because he chants "fucky, fucky, fucky" when he's upset. Oh Fucky is a forty-something Scientologist who stares at Becca's ass and propositions her creepily multiple times.

Some parts of Becca's acting journey feel too easy, but I liked how she had multiple failures getting there, as well as a handful of faux pas. The fairy godmother trope towards the end did make me raise an eyebrow, but everything else seemed okay. I've read a lot of celebrity memoirs and one of the recurring trends was that big breaks seem to happen all at once once they finally start happening.

So here are some of the things I really liked:

✨ This is an older, college age YA. There's blurred lines between what constitutes YA and NA and this falls smack dab between them. Characters are all college age and there is some reference to sex and adult content, but it isn't as explicit as NA. Most parents probably wouldn't freak out if their sixteen-year-old was reading this, and the writing style does feel slightly younger in tone (not as many swears, for example). I honestly love college-age YAs and I'm glad to see more of them.

✨ Asian love interest who isn't played off as geeky/passive/comic relief. I watched this great video on YouTube recently which critiqued how Asian-- and especially South Asian-- men are often portrayed in media (usually as geeky, socially inept comic relief). Raj was a great love interest and just an all around nice guy. His culture really isn't mentioned all that much though, and bar a handful of references to his ethnicity, if you changed his name, he could just be a white character. But he's never fetishized by the heroine, and there are no cheap jokes at his expense, and I really liked him.

✨ A likable narrator. I liked Becca. Is she an idiot? Yes. Moving to LA and not researching agents, jobs, apartment costs, and food budget first? Pretty stupid. But I could totally see some romantically inclined teen moving to LA with just a suitcase because she saw it in a movie or a Vanessa Carlton song and thought it sounded adventurous and romantic. The money issues are also pretty typical of a teen. I said in another review that I can handle stupid decisions if it feels like a character flaw and not a flaw of the writer, and this felt like a character flaw rooted in Becca's immaturity. She grows more responsible as the story goes on and learns from her mistakes, and I really appreciated that.

✨ Somewhat realistic portrayal of scratching it out as an actor. I mean, I think?? It's not all glitz and glamor, based on what I've read and watched in interviews, and the author makes a point of showing Becca taking on unappealing gigs and even falling for some shady ones. I'm not an actor, so I can't personally speak to the rep, but it felt realistic enough to me, a layman, that I was like "ok."

✨ Big misunderstandings EVERYWHERE in the last act. Why?? This is seriously the worst trope ever, and Becca has one not just with Raj, but also with Marisol, her best friend. The Marisol one was slightly more understandable (even though I didn't like the twist), but I didn't understand why she went off on Raj like that. It felt very entitled and selfish to me. Jmtc.

✨ The one night stand with Reed. I don't mind it when heroines get down and dirty, and since she was off with Alex and not official with Raj, I didn't care too much. But I wasn't sure what the point was. It felt like it was just for dramatic purposes and to make things awkward on set.

✨ The fairy god agent. Pretty sure this never happens and is pure wish fulfillment on behalf of the author.

Apart from those niggling annoyances though, I quite liked this. It reminded me of those early 2000s teen movies that were all about girls finding their dreams, like A Cinderella Story (2004) or What a Girl Wants (2004). This is just a feel-good story that is drowning in wish fulfillment but you can totally imagine on the big screen along with a kick-butt soundtrack. It was also exactly what I needed right now, psychologically, and went down pretty smooth with my plum margarita.