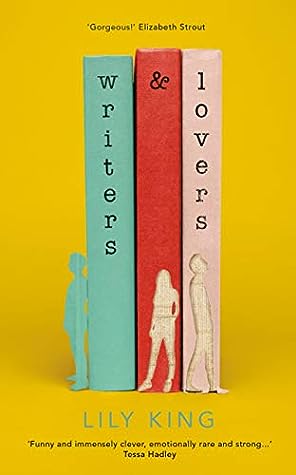 Wow. I am kind of shocked by how much I loved this. WRITERS & LOVERS is the first book I've read that truly captures what it's like to be a woman in your late-twenties/early-thirties and not have your life figured out. When all your friends are in serious relationships or married, with real desk jobs and houses of their own, and you're still working a dead-end job and chasing the dream, while serial-dating like you're still in college, it's hard to be taken seriously.

But this book, it gets that.

Casey is living in New England working a waitressing job she hates while trying to finish up her novel. Her mother has just died, she has health problems but no health insurance, her student loans have defaulted and seem virtually insurmountable, and she's stuck dating two guys-- one a mature "adult" with two young children and a job with the respect and esteem she craves, and the other is in the same boat as her-- struggling to make it, still figuring his life out. She flip-flops between the two, afraid of committing to a course of action that could change her life forever-- for better or for worse.

As an author myself, I've read a lot of books about other writers and most of them don't get it. They either romanticize writing as being this holy grail of careers (ha) in this carefree bohemian life (ha) where you meet interesting people all the time and drink champers over Proust (ha-ha-ha), or else demonize it as being a career that attracts crazy people who use it as an exercise to exorcise their demons (ha... actually, wait this one is more accurate). Casey falls in the middle of both camps. She hates the pretentiousness of some writers, while also desperately craving that acclaim for herself. She stereotypes people based on what they read (I do this too-- LOL), she feels jealousy about others' success, and she is afraid to read the works of the people she knows, not just because they might hate her if she doesn't like their work but also because it might be too weirdly, creepily intimate (YES).

Besides all the wicked observations about writers and readers and pretentious intellectuals, there's also just some really good observations about what it means to be an older young adult who is still trying to grow up while feeling as if they already should have. Casey is immature but she's trying not to be. The struggles she faces-- even though this book is set in 1997-- are still relevant today, and it touches upon a lot of things that plague women, like fertility, sexism, being taken seriously as a professional, passion, domesticity, anxiety, partner intimacy, and so much more.

This is the first book I've read in a long time that I feel really gets me. I loved it.