The Mutual Admiration Society: How Dorothy L. Sayers and her Oxford Circle Remade the World for Women by Mo Moulton 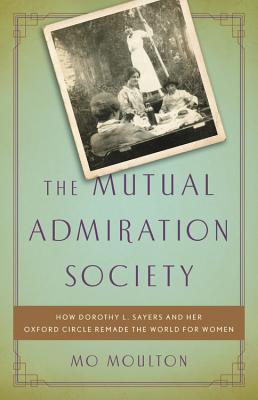 I hate writing reviews for books that bored me. On the one hand, I (usually) go into a book expecting to like it, and on the other hand, it kind of sucks to have to revisit something you didn't like and tell everyone why you didn't like it. Sometimes I don't even bother to review, but I feel obligated to with this one as others may share my expectations and feel similar disappointment.

THE MUTUAL ADMIRATION SOCIETY is a biography about Dorothy L. Sayers (called, bewilderingly, "DLS" through the entirety of this book) and the friends she made at Somerville College, a branch of Oxford that basically treated its female students like a bunch of dilettantes auditing a class, not even awarding them degrees for their work until later. #Feminism

While at school, "DLS" and her friends called themselves The Mutual Admiration Society, and it was basically exactly what it sounds like: a group of artsy, intellectual women who had great respect for each other, supported one another in their endeavors, and basically had a grand old time amusing one another.

The book follows them through two World Wars, various relationships, the many obstacles of being a woman in a time when women were accorded little to no respect, tempestuous relationships, questioning their sexuality, failures, successes, and so many other things. Considering that "DLS" was the baited hook for this book, I was surprised by how little the focus seemed to be on her. Even more surprisingly, I was surprised (ha) by how little I liked her compared to the others like Charis, who seemed incredibly cool and modern for her times, and Muriel, who was a somewhat out lesbian.

Charis Frankenburg was honestly the coolest lady in here, as some of DLS's beliefs seemed almost Ayn Randian, especially in how she seemed to detest other women so much in the beginning. I guess she changed later on in life and you can't really judge people outside the framework of their times, but man. She seemed awful. Charis, on the other hand, was basically a mommy blogger influencer for her time, having huge impacts on the way people raised children (for the better) and did some pretty cool work helping improve the conditions of children living in psychiatric facilities. I would read a whole book about her-- she seemed like she had her heart in the right place.

Maybe I would have enjoyed this book more had I been a bigger "DLS" fan. In some ways, this does kind of read like a fan's ode to DLS, especially with how Mo Moulton often reads between the lines-- or cites others who do-- of DLS's own writing to speculate on her life. I guess it's probably an irresistible temptation to do so when actual facts and journals exist. It's human nature to speculate. That said, I feel like doing that gives the book a sensationalist, breathless edge that reads more like the adulation of an opinion piece and less like a concrete biography.

I can respect the research Moulton put into their book, and I can see why so many DLS fans enjoyed this book as much as they did, but I also agree with the skeptics who did not appear to enjoy it. I feel for those skeptics because I felt the same way. Not all of the women in here are equally entertaining and fascinating, and it often feels like a Vanity Fair that's been padded out to novel length.