The Wrong Kind of Women: Inside Our Revolution to Dismantle the Gods of Hollywood by Naomi McDougall Jones 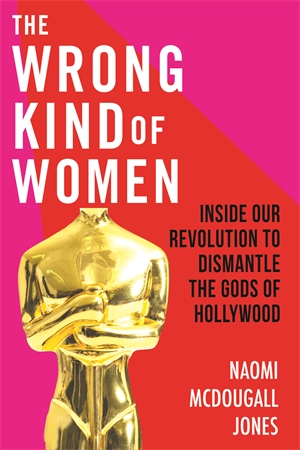 What a pleasant surprise this was! I am a feminist, and am always eager to get my hands on new books about feminism coming out. THE WRONG KIND OF WOMEN specifically addresses the way women are represented in Hollywood, as well as how the movie industry is set up to shut out women from landing top-tier, prestigious roles-- especially if they are women of color and/or LGBT+ and/or disabled. When they said "it's a man's world," they might have been talking about the world at large, but it seems to really apply to the movie industry.

McDougall Jones talks about the harassment many women face in their professional roles, and a little about the #MeToo movement. She talks about typecasting-- not just for white women, but also how women of color and LGBT+ (specifically trans) women are forced into cliched and stereotypical roles, forcing them to decide whether they want to land a movie role and perpetuate a harmful stereotype or stick to their guns but become branded as "hard to work with" and get no work whatsoever.

She also talks about how actresses "peak" younger than men, with a sharp drop-off in work as soon as they hit forty. She talks about the male gaze and how and why it's harmful, and how sometimes it can be so subtle you might not even realize what is happening until you think about it. She talks about the importance of women's stories-- especially women's stories written and directed by women-- and how even some of the recent "wins" Hollywood has achieved with regard to diversity can be harmful because it makes people think that the work is done when really, we have so much further to go.

The book ends with resources on how to be a more inclusive viewer, actor, producer, writer, etc., with some links to websites and projects devoted to increasing and supporting diverse actors and how they are represented in film. I'll admit, when I picked up this book, I did worry about how inclusive it might be, but McDougall Jones acknowledges her own privilege while addressing the issues and concerns that are more exaggerated or unique to women of color/disabled women/LGBT+ women, and even interviews some of them so their stories are included and she isn't just talking for them.

If feminism isn't your cup of tea (why wouldn't it be, though?) and therefore isn't enough to sell you on this book, there's also a lot of really interesting insider-info about what it's like to work in the film industry (McDougall Jones is an actress, writer, producer), as well as a lot of really interesting breakdowns about film demographics and statistics. She talks about the shift in marketing movies to blander box office busters that do well internationally, and how China's burgeoning middle class has changed how the United States studios choose to make and market movies. Vox also did a really interesting video about this which you can find on YouTube and I recommend it after reading this.

THE WRONG KIND OF WOMEN takes a deep look at a problem plaguing the film industry, some offers of solutions on how to fix it, and also provides fresh and valuable insight about the struggles that real women face working in an industry that they love and that really ought to be much kinder to them for all the sweat and tears they produce for often far too little value and recognition.

I definitely recommend this book!