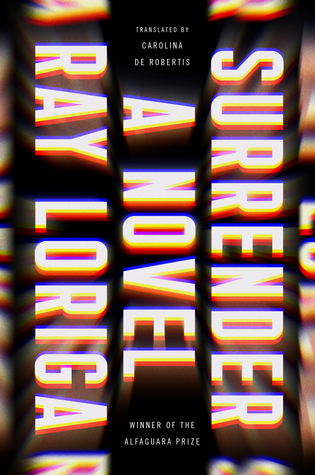 This Spanish dystopian novel was just translated into English and I am super excited to be one of the first English readers to read it! The blurb compares this book to Margaret Atwood and Jose Saramago which really shaped my expectations while reading it since I am a fan of HANDMAID'S TALE, ORYX AND CRAKE, and BLINDNESS. Do NOT listen to the blurb! The blurb is wrong. While enjoyable, I would not say that this work is of the caliber that those two authors are. If anything, it kind of reminded me of Cormac McCarthy's hit dude-bro classic: THE ROAD.

SURRENDER is a very soft dystopian novel. It's about a man (unnamed) who is our narrator. He lives in the countryside with his wife and a child they kind of unofficially adopted when he wandered on to their property one day. They are under an oppressive, militaristic government and one day, said government announces that they are going to have to evacuate and burn their house; they are being moved as refugees to a place called the glass city.

The glass city is quite literally a glass city with walls you can see through. Everyone can see everyone while they do all kinds of things, including bathroom and bedroom stuff. Yikes! I'm sure this is Swiftian commentary on transparency, taking the reductio ad absurdum approach to show what happens when a government forces its citizens to, quite literally, reveal all their secrets. The effect is appropriately disconcerting.

I thought the translation was very smooth for the most part and flowed well. The story was interesting and I liked the narrator, although some of his actions towards the end of the book felt odd and unnatural compared to the beginning, and I'm not really sure why. (Even he, the narrator, remarks on his strange behaviors at times, so you know it was intentional.) Mostly, it was fun to read a literary dystopian novel set in a place beyond the United States. I liked it but I think I may have liked it more if the blurb didn't hype it up so much by comparing it to two of the greatest modern dystopian authors EVER. Your mileage may vary, but I don't think this is a book that is going to appeal to everyone.