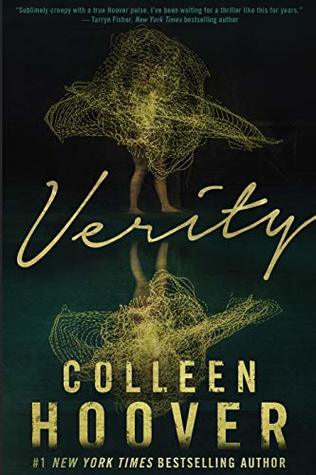 I'm going to be 100% honest. I hated Colleen Hoover's early stuff. No matter which one I picked up, I never seemed to like it. Then she wrote TOO LATE, and I found myself sucked into her ability to write drama and dark characters. IT ENDS WITH US was even better, ratcheting up the drama and instilling it with a solid message. But VERITY is Hoover's best work yet, with a mystery that is comparable to GONE GIRL, and a writing style that seems to be channeled from the great Tarryn Fisher herself via osmosis.

Lowen is a lower-tier writer struggling to make ends meet. Nobody is as shocked as she is when her agent manages to broker a deal to have her be the ghostwriter to the best-selling mystery author, Verity Crawford. Verity has just suffered an accident leaving her unable to write, and they need someone to provide for the fans who will be able to do her book justice.

To Lowen's surprise, Verity's husband is the attractive man she has a run-in with on the street after witnessing a man get crushed by a vehicle. With such an auspicious first meeting, there's nowhere to go but up, right? Ha... ha... NOPE. When she moves into the family home to make sense of Verity's papers, she has to fight her growing attraction to Jeremy-- and her growing fear of his wife and everything she represents.

Because even though his wife is catatonic and can't move, ghosts haunt the family home and the very books that Lowen herself is supposed to help write. And Lowen has found a memoir written by Verity suggesting that not everything is as it seems. In fact, Verity might just be a terrible person... and Lowen herself could be in grave danger.

I couldn't put VERITY down. Not only does this capture all the struggles of being a writer SO WELL, it also features so many of my favorite tropes-- family secrets, a bit of an unreliable narrator (or not?? spoilers), writers as main characters, forbidden romance, kind of a Gothic haunted house vibe, murder, mystery, mayhem, and so much more. I freaking loved the ending. I loved the book even before the twist at the end but after the twist I was clapping my hands and saying BRILLIANT.

Seriously, this book is so good and if you're not afraid to go where angels fear to tread, you'll love this.