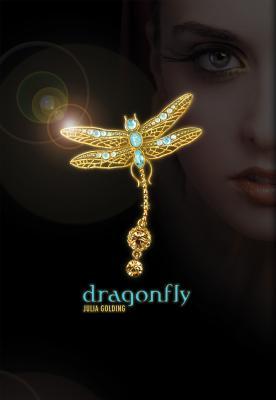 I've had this book on my Kindle for literally years and am trying to clear out some of my older titles. What better way to do that than an impromptu buddy read with the lovely Tadiana?

I bought DRAGONFLY because the summary sounded like it was going to be right up my alley. It's about a girl named Tashi and a boy named Ramil who are from two countries on the opposite side of the world, joined together in an arranged marriage to ally their nations against a hostile one.

From the very beginning, the two of them seem to cross all kinds of faux pas, and pretty soon their dislike is mutual, and both countries have taken offense. When the marriage is on the verge of being broken off, the two of them are kidnapped by the very nation they were going to marry to unite against, and the villainous mastermind of that endeavor is named, um, Fergox Spearthrower. (Which, okay, sounds kind of... racist?)

You know Fergox is a bad guy because he's depicted as a lawless savage and he has more than one wife. He hopes to make Tashi his most recent wife, meanwhile Ramil is creepily pursued by Fergox's sister, who tries to take him to bed when he's drunk. Luckily, they escape to one of Fergox's colonies, where revolution happens to be brewing as his commonwealths struggle to escape his control.

So there were some things about this book I liked. The writing was gorgeous and I liked the world, sort of. It was just really boring. The characters were all so bland. I was also kind of uncomfortable with how some of the races in this book were coded. Tashi, as Tadiana pointed out in her review, is coded-- by name, culture, motif, and ritual-- as being Asian-inspired, even though she looks white and has blonde hair. Which feels kind of culturally appropriating, imo. Likewise, the savage guy with the last name Spearthrower and the multiple wives seemed kind of... I don't know. Questionable.

I was trying really hard to finish this book but I'm not into it at all, so I'm just going to set it down. I don't hate it, and I'd probably give it 2-3 stars if I managed to finish it, but why bother?