Dot Con: The Art of Scamming a Scammer by James Veitch 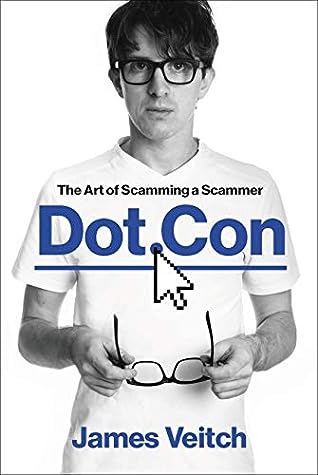 I became obsessed with James Veitch a while ago while I was on a TED Talk binge and came across the grabbily titled, This is what happens when you reply to spam email. I enjoyed it so much that I ended up Googling him to see if there was any more where that come from and landed on the Scamalot series he did with Mashable. You can imagine my delight, then, when I managed to finagle a copy of his book, DOT CON, which further chronicles his adventures in tormenting scammers by wasting their time.

I think part of why I like James Veitch so much is that he's not malicious or mean. He doesn't insult the scammers he corresponds with or yell at them. He actually reminds me a lot of another "troll" I like, Ken M., whose sense of humor is self-described as "bringing a banana to a gun fight" (per his interview with Vox). In his correspondence with these scammers, James deflects their requests (or demands) for personal data with zany good humor, playing the blithe idiot while never outright saying no, and it's absolutely hilarious when they try to pander to him (some of them go to great lengths to win his credit card info!).

If you're a Veitch fan already most of the content in this book probably isn't going to be new to you. I recognized most of the emails from his Scamalot series and only saw a couple new ones. I didn't mind seeing them again though-- especially the Giant Gummy Lizard one, which is one of the funniest things I've ever seen on the internet. However, if you're new to James Veitch's shenanigans, you should definitely read this book as it's honestly pretty pure and frankly hilarious. In his TED Talk, he said that he doesn't feel bad about messing with these guys (or gals) because every minute they spend with him is a minute they don't spend preying on the vulnerable, and I think that's true.

And if you don't want to read the book, well-- we'll always have Tuscany!