Color Outside the Lines by Sangu Mandanna 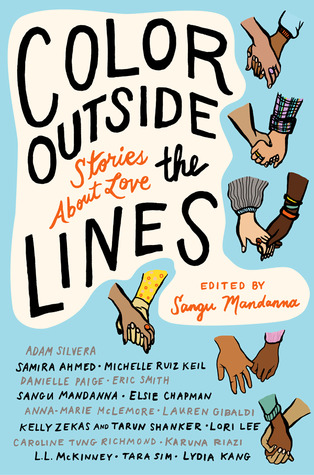 I loved the idea behind this anthology so much that I had to get it. COLOR OUTSIDE THE LINES is a collection of short stories that are all about diversity-- interracial relationships, LGBT+ relationships, and even a couple with both-- and some of the challenges and delights and obstacles that occur within these relationships, while also celebrating them wholeheartedly (well, mostly-- more on that to come).

Short story collections are always hard to rate because they tend to be uneven. It's inevitable that you'll like some of the stories more than other ones, which is why I tend to rate each story individually and then average my rating out over the whole collection. I think that's the fairest way to rate books like these since the editors are on the hook for the authors they chose to be included to represent them, and a bad fit is a bad experience.

This is a really great story about two people in Mexico who end up bonding over the pain in their art against the backdrop of flower gathering for a rich man's wedding. The writing is poetic and brilliantly evocative and I loved this story so much. This is definitely an author whose work I would want to explore more, because I loved their writing so much!

What We Love: ☆☆½
Lauren Gibaldi

This story was okay but kind of heavy-handed. It's about a Jewish girl and an Indian boy who find romance when they unite together against a bullying classmate. I like the idea but the bully was such a laughable caricature of evil, and the premise so forced, that I just couldn't get into it.

Giving Up the Ghost: ☆☆
Tarun Shanker and Kelly Zekas

This one was just weird. First, it's kind of a paranormal/AU type story where everyone is haunted by ghosts only they can see. The main character is Indian and haunted by a Chinese ghost who plays matchmaker for him. This matchmaking is the focal role of the story. It's... weird.

This is a story (F/F) about a black/white interracial couple trying to navigate their brand new relationship while also dealing with the white character's racist dad (ugh). Also deals with activism and the BLM movement, and it has a nice ending (I was worried). I thought this one was cute.

Story about a Hmong girl and a white guy with magic realism. I didn't get/understand/like this one.

This story is REALLY short which is a shame because it has an important topic at its heart (the lingering pain caused by the British occupation of India). Being so short made it seem superficial.

Set in India when it is being occupied by the British, and is a romance between an Indian girl and an Irish guy serving in the British army. SUPER DOWNER story with no HEA. Very preachy, too, and seemed rushed, like the emotionally manipulative ending was supposed to compensate. Bleh.

The Coward's Guide to Falling in Love: ☆☆☆½
Caroline Tung Richmond

This story also doesn't have an HEA but I actually really liked the theme of empowerment, so it didn't leave a bad taste in my mouth like the previous story did. The heroine in this one reminded me of me; it's always important to remind teens that they need to take risks to see change.

Meet-cute between (I think) an Indian Muslim girl and boy that focuses heavily on family, which I loved. It kind of reminded me a bit of LOVE FROM A TO Z. This is another story that I think would have worked really well as a full length novel, which the author hopefully considers doing!

Bisexuality rep, Mexican heritage, fun hookups, and rockabilly/punk culture in Berkeley, CA. Do I need to say anymore? I don't think so. This one was fantastic.

I knew this author sounded familiar, and it turns out she wrote CASTER, which I loved. I really liked this story, too. Like her other book I read, "The Boy Is" features a strong Asian heroine. This one opens with her breaking up with her creepy white boyfriend who, it turns out, treats her like she's a fetish and not a person. The rest of the story is about her finding herself and what she wants. Love it!

Sandwiched in Between: ☆
Eric Smith

I actually... low-key hated this one. So, if I'm rating off the technical elements, yeah it was written fine. It's about two Middle Eastern teens who are dating and the girl is raised with her culture in the home but the boy was adopted by white parents (and has adopted siblings of other various ethnicities). The execution was totally horrible. The boy's girlfriend does nothing but berate him about his privilege and how "white" he is throughout the whole book and when she meets his parents for the first time, and the mom serves hummus, she explodes with rage.

It ends on a "happy" note with the girl calling him a "jumbled mess" and they laugh and I'm just sitting here like, wait, she is gatekeeping his ethnicity and actually being really offensive and this is a toxic relationship, but it's being written like she's so woke and in the right and what even ???

Yeah, this one definitely made me the angriest and I kind of hated it.

I love Lydia Kang! I've read three of her books and they were all amazing, and I'm happy to say that this short story didn't disappoint. It's a fantasy story with characters who seem to be coded as East Asian and South Asian, and there's beauty and the beast elements, but it's also about overcoming stereotypes and learning not to be prejudiced, and I really thought it was a nice close.

Overall, this is a pretty decent collection. I think there's something for everyone in here, and even though the stories are uneven in quality, there are some pretty standout ones and Tara Sim totally needs to make Death and the Maiden into a full length book so I can throw my money at her.

Averaged rating: 3.1 rounded down to an evened-out 3 stars