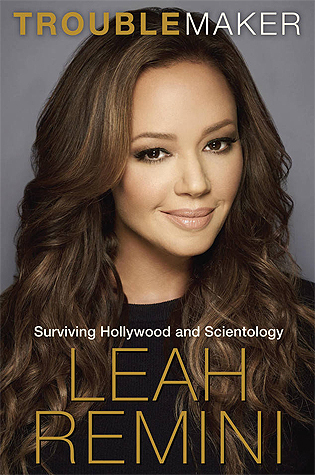 Leah Remini was an actress on a lot of TV shows I didn't watch. She also used to be a Scientologist. TROUBLEMAKER is a celebrity memoir about her big break and her rise to fame, but it's also about growing up as a Scientologist, an inside look at some of the inner-workings of a religion that is known for being secretive and invasive, and a tell-all about why she chose to leave.

This is a really compelling memoir and I breezed through it in just over a day. Personality-wise, she reminds me a lot of Chrissy Teigen, in that she tells things like it is without caring who she's going to offend in the process (hence the title of the memoir). I didn't actually know much about Scientology before picking this book up and was kind of blown away by how much money parishioners end up pouring into the Church, and how many hours and hours of classes and auditing sessions they have to attend. It honestly sounds like a hideous mash-up of college work and Sunday confessionals: two things that should never be combined.

Leah obviously has a huge passion for acting and being in front of a camera and it was a lot of fun to hear about her excitement with each roll she managed to land (Saved by the Bell, Living Dolls, King of Queens, etc.). I liked hearing who was nice and who was mean. I think that's one of the most fun elements of memoirs like these, and I'm always secretly disappointed when celebrities won't dish.

The dark edge to this memoir is obviously the religious angle. One of the things that really disillusioned her was Tom Cruise and the way he was able to act with the silent (or not so silent in some cases) approval of the Church. She was invited to his wedding with Katie Holmes and the way and some of the other guests acted was really, really creepy. Another thing that put her off was the disappearance of David Miscavige's wife, Shelly, who she even went so far as to file a missing person's report for. But the thing that she said really drove a wedge between her and Scientology for good is that you're supposed to Disconnect with your family if they ever become a Suppressive Person (SP), meaning you can never ever talk to them again. She didn't want to have to do that.

If you're interested in dark memoirs, religious memoirs, or celebrity memoirs, you'll probably really enjoy TROUBLEMAKER. Leah Remini has a great voice, she isn't afraid to dish, and it features some truly bizarre exploits of the rich and famous and the religiously zealous. I really enjoyed reading this a lot and hope everything is still working out for Ms. Remini in this new chapter of her life.