The Questionable Behavior of Dahlia Moss by Max Wirestone 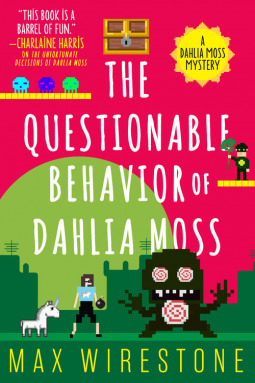 Note: this is the third book in the series but it works as a standalone. Thank goodness for that, because I haven't read the other two books in the series (although now I kind of want to!). The Dahlia Moss mystery series fills the niche in hobby/career-themed mysteries that are populated heavily by knitters, bakers, and antique shop owners - old-fashioned, fuddy-duddy-type jobs - instead of the new and shiny modern careers, like tech.

In THE QUESTIONABLE BEHAVIOR OF DAHLIA MOSS, Dahlia gets hired on to be an industry spy for a game company after an anonymous whistle-blower posts a condemning blog on Reddit about how poorly the company treats its employees. Working undercover as the new secretary, Dahlia quickly figures out that the whistle-blower wasn't wrong when half the employees seem to be in a fugue-like state from sleep-deprivation, and the other half are celebrating their dysfunction by indulging in weird - and possibly illicit - behaviors.

Then somebody turns up dead and the writing's on the wall. The writing, of course, says GAME OVER.

I liked this book. It has the light-hearted, wacky vibe that the Stephanie Plum books have, only instead of celebrating the weirdness of New Jersey, it celebrates the weirdness of the tech industry. These characters aren't very likable, but I do think there are some things it gets right about tech: deadlines and the casual workplace environment, being two. In some ways, this is an Office Space for the 21st century, with some murder and corporate scandals thrown haphazardly in.

The female narrator was also well-done. Sometimes dudes write female characters and the voice just sounds wrong. Dahlia Moss sounds like a lady for the most part. The only "tell" that really gave this book away was the fact that Dahlia, when riding in an Uber, accepts the mint that the Uber driver gave her and eats it. Um, nope. Nope. Nope. Nope.

If this book has a flaw, it's that it's sometimes too kitschy and self-aware, throwing heavy winks at the audience that quickly become tedious. Also, I felt like it jumped the shark at the end, particularly with the phone call to Morgan Freeman and the roofies incident(s). I'm surprised they don't have HR permanently on speakerphone, to be honest.