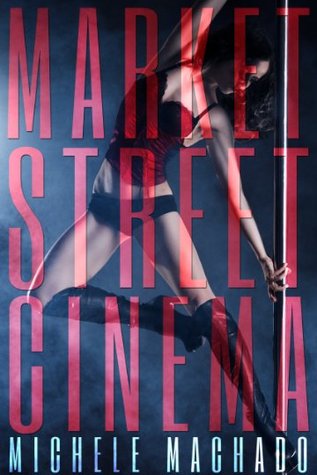 Honestly, it's getting to the point where you only have to wave a trashy book in front of my nose before I tear into that sucker the way the velociraptors did to that cow in Jurassic Park. A new adult book about a girl who doesn't want to go to college and ends up stripping to pay rent and solve all of her self-created problems? Logical brain says, "No, Nenia, don't do it." Stupid brain says, "YAAAS, GURL. READ THAT BOOK - AND WHILE YOU'RE AT IT, PASS ME THAT MOSCOW MULE."

I applied for MARKET STREET CINEMA because the title is based off a real place in San Francisco. I've walked by it (hard to miss the bright colored building with the racy pictures of pretty ladies). I don't believe it's standing any longer; it went the way of many unsavory SF "historical" sites: torn down to make way for Big Business.  Still, the prospect of reading about places I've actually been was irresistible and 90% of why I bought this book.

Lita is eighteen years old and starting her first year of college that her parents are paying for. However, being used to coasting in high school, she decides she isn't cut out for the rigors of the academic life and drops out - a fact her none-too-pleased parents discover when the notification from her college comes in the mail (*tries to imagine how her own parents would have reacted to such wtfery*). Her dad is especially angry and kicks her out of the house, so Lita works at a lingerie store while planning her next move. One day, a woman comes into the shop who tells Lita that she works at a dance club in SF and that the dancers there would be thrilled to see a catalogue where they could buy new costumes for their acts. One things leads to another, and pretty soon Lita is dancing and stripping at Market Street Cinema herself, because, obviously.


My expectations for this book were pretty low since I don't have a whole lot of faith in the new adult genre - I've been burned too many times. MARKET STREET CINEMA came as a pretty nice surprise. The writing quality is decent and there's no half-assed romance thrown into the mix for "drama." The entire story is just Lita trying to make it on her own in the ridiculously expensive Bay Area, trying to figure out what she wants to do with her life, and her developing friendship with Liberty. I feel like this book also took a pretty realistic view of stripping for money: the competition between the girls and the caginess of their responses when confiding how much they really made, the men who come in and pay well, the creeps who come in and bend the rules, and the fact that while some women enjoy it, others see it as a kind of trap with an expiration date all felt grittily accurate. I mean, from what I would guess. I don't know any strippers. Maybe real strippers would react to this book the way real army people reacted to The Hurt Locker.

I think my favorite aspects of this book were the observations on the city and the Bay Area at large. It's set in the 90s, so it's a little dated (GOOD LUCK buying an apartment in San Ramon on a stripper's paycheck now, my friend), but many of the observations made me laugh. Yes, it's as expensive as Christ to live here. Yes, BART commuting is an eternal frustration. Yes, NOBODY but the tourists call San Francisco "Frisco" and you will be judged if you do (FRISCO IS A CITY IN TEXAS, FOOL). I did side-eye Liberty having a really nice apartment in the Haight with what she made on her stripper paycheck, though, because that area has always been desirable and expensive, and the price for a studio apartment there now would run you over 3k/mo. By contrast, apartments in the Tenderloin (which is a lot closer to Market St., and probably where a stripper would live, since I can't imagine wanting to walk far, alone, at night, in the pre-cell phone era) are about 1.7k/mo.

My least favorite aspect of this novel was the ending. It felt like a shitty way to get Lita on the "right" path. I don't want to give spoilers in this review, but it really bummed me out. I think I understand why the author did it, and it does offer some pretty valid criticism on how sex workers are viewed and treated in our society, but man - talk about cold.

Sex work seems to be a common theme in this author's novels. I see that she has another book called MAY AT THE PEACOCK RANCH, which I suspect is based off the BunnyRanch in Carson City, Nevada (it's a legal brothel - prostitution is legal and regulated in certain parts of Nevada). I'm interested in checking that book out eventually, because I read a book about the BunnyRanch a few years ago while researching the sex industry for a novel that never actually came to fruition. It's a fascinating topic and one that's often stigmatized by society, so I'm interested in seeing her take.

If you enjoy gritty books about unsavory topics, you should check out MARKET STREET CINEMA. It paints a rather interesting portrait of the San Francisco that the tourists don't often see, and the subject matter is handled mostly inoffensively and with some degree of finesse.