The Devil On Horseback by Victoria Holt 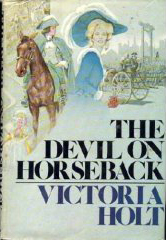 Holy #StealthReads, Batman! It's been a while since I sneaked a book past GR's radar, but I've been so tired lately that I've mostly been napping on public transport instead of reading on it. I finally finished my most recent purse book, and that book was THE DEVIL ON HORSEBACK by Victoria Holt (because you know that with a title like that, I couldn't help but buy it).

Victoria Holt is one of those authors I keep coming back to again and again, even though I have a love-hate relationship with her books. When she's on her game, she is on her game; but she also churns out a fair number of misses. For me, THE DEVIL ON HORSEBACK was one of her misses.

Unlike most of her Gothic romances, which are set in Victorian England, THE DEVIL ON HORSEBACK is set in Georgian England with the French Revolution looming close-by.

The heroine, Minella, is the daughter of a school teacher who has lofty aspirations for her daughter. These aspirations come to a bitter end with her untimely death - especially when the nobleman who was angling after Minella is corralled back into his family's clutches, basically leaving her alone and penniless. Minella has a friend named Margot who is the daughter of a Comte, and she ends up pregnant (out of wedlock). Her angry father sends the two of them away (blackmailing Minella into going by saying that the scandal would threaten her school) until Margot gives birth.

Minella continues to live with Margot and her father, much to the perplexity of their rich friends. She starts hearing whispers that make her uneasy - whispers whose truths are confirmed when the Comte asks her to be his mistress! She is attracted to him despite herself, traitorous body, etc. etc., but cannot give in to such wicked urges because propriety! So she tells him no, because he is married and she is not that kind of woman, etc. etc. How convenient then that the Comte's wife dies shortly thereafter, overdosing on her own medicine! How coincidental! Surely the two are not related, right? RIGHT?

Meanwhile, the French Revolution is happening and stones are thrown at glass houses and people are being attacked and executed. It's really more of a backdrop thing than an actual addition to the setting until the very end, and only when it directly impacts one of the two main characters. This plot twist fails to capture the horror of the French Revolution, however, and is resolved bloodlessly and quickly.

I am disappointed by this book. My friend Naksed said that this book reminded her of a watered down DEMON LOVER, and even though I did not like DEMON LOVER, I think that is true. The plot and the writing were so much better in DEMON LOVER, and if it weren't for how spineless the heroine was and how unrealistic her reactions were to the brutish hero's actions, I would have given it a much higher rating. The wicked Comte had a few good lines:

"When we transgress," he went on, "we must pay for our sins. This is the payment I ask." He took my face in his hands and kissed me on the lips - not once but many times (22)

But mostly, he just came across as a creepy older dude who was obsessed with the best friend of his daughter, at the expense of his still-very-much-alive-until-one-point wife. I spent most of this novel feeling very bored, and that is a very terrible way to feel while reading a book.