The Sheik by E.M. Hull 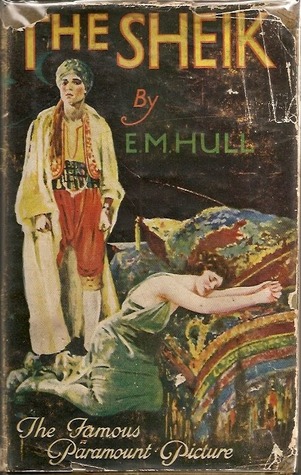 💙 I read this for the Unapologetic Romance Readers' New Years 2018 Reading Challenge, for the category of: Classic (Literature) Romance. For more info on this challenge, click here. 💙

In my review of THE FLAME AND THE FLOWER, I said that Woodiwiss is often credited with writing the first bodice ripper. While she was certainly one of the first mainstream authors to publish a widely read romance with an open bedroom door *wink*, THE SHEIK has a shockingly similar formula to the "modern" bodice ripper, and it was published in 1919. The only difference is a deliberate omission of sex scenes, but it's clear that they're happening (and it's equally clear that they're nonconsensual).

Diana Mayo (that last name kills me, by the way - I kept picturing her as a pasty white jar of mayonnaise rolling through the desert) is a tomboyish, independent woman of noble birth who enjoys gallivanting through exotic locales with her rather unwilling and prissy brother, who thinks that she ought to be more submissive and demure. She turns down a marriage proposal from a desperate admirer (perhaps the first recorded incident of someone being placed in the "friend zone" - and like most guys in the "friend zone", he doesn't get the rules), so you know she's independent, and then rejects her brother's suggestion that she perhaps oughtn't to ride through the desert alone, except for a caravan escort of "natives," because, again, independent.

Unfortunately for Diana, her escort has sold her out and she's ridden down and then captured by the eponymous sheik himself, Ahmed Ben Hassan. Who then rapes her. Many times.

While reading this book, I kept thinking to myself that this probably would have not just been banned but probably also set on fire if it had been published in the late 70s, when all those absolutely insane bodice rippers were being published and everyone was trying to out-WTF each other. This book desperately wants to be dirty, and since sex is off the table, it compensates with violence and racism. Horses are beaten bloody, a servant is whipped, Ahmed shoots Diana's horse to punish her - twice (once to wound, once to kill), a woman is killed by having a knife driven through her heart, and a man's hand is shattered when his rifle explodes while he was holding it. It was as if the author was like, "By God! If they won't let me write about the one bodily fluid, I'll just write about the other!" More disturbing still is that all that horse-breaking serves as an allegory for the hero and the heroine's unconventional relationship: by the end of the book she is utterly broken, a shell of her former self. She admits that she no longer has any pride where he is concerned, that she would die for him... and when she finds out that he intends to send her away (out of love for her), she decides to do just that by taking his revolver and attempting to shoot herself in the head. He misdirects the bullet just in time by whacking her hand. (That must be the slowest-moving bullet ever.)

But as disturbing as the violence is, it was the racism that I found most shocking. Granted, this was written in the 1910s, so it's not going to be imbued with the PC-friendly content we expect from the romances of today, but it was still quite a shock to see just how acceptable it was to write such casual racism in mainstream publications. The n-word is used several times (both kinds); the Algerians are repeatedly referred to as Arabs; phrases like "Oriental beast" and "primitive" and "uncivilized" and "savage" are casually thrown around every other page; and the biggest kicker was this - it turns out that Ahmed isn't actually Algerian at all! He's half Spanish, half English, and was adopted by a sheik who fell in love with his mother, and out of love for her, bequeathed to him his name and title.

One of the "conflicts" of the book is Ahmed's blistering hatred of English people, and his refusal to speak in anything but French or Arabic. It turns out that his father was abusive to his mother, and that's why he hates English people. When he found out about his English heritage, he threw a major temper tantrum, refused his title, ran off to the desert, and never spoke English again (even though apparently he can speak it and understand it). Part of the reason he was so cruel to Diana is because it made him feel like he was getting back at his father and his father's people, which is all kinds of messed up. Seriously, dude?

Also, Diana is kidnapped by a rival sheik named Ibraheim and of course he's ugly and dirty and fat and has blackened teeth and really dark skin (although not so dark, the book says, that you can't see the dirt all over him). I've never seen an author use so many adjectives to make a character as unappealing as possible. He even "speaks French villainously" and I'm not sure how one speaks a language villainously, but there you go. At this point, I was giving the book the stink-eye, and when I found out Ahmed wasn't even Algerian, I got even angrier, because it felt like the message was, "Oh, he's white after all, so it's not bad, and that's why he's better." This is why I tend to avoid reading bodice rippers about sheiks and Native Americans - they always do this. The alleged hero of color is always a "half-breed" (and yes, they do describe them that way in the blurbs sometimes), and while there is absolutely nothing wrong with being biracial or multiracial, there is something wrong with making a character part white for the purpose of suggesting that this "whiteness" makes them better.

This book was popular enough that a movie was created by the same name, starring Rudolph Valentino. The movie is supposed to be a lot better (no rape, I believe), and Rudolph Valentino is a babe and a half, so if you're interested in this story that seems to be the way to go (although if you're feeling masochistic, you can grab it for free on Kindle). I noticed that there is a sequel available called THE SONS OF THE SHEIK. It isn't available for Kindle in English, but I did find a Spanish version, so if I ever feel like I want to work for my masochism, I'll buy that and let loose.

Interestingly, the plot of this story is very similar to Johanna Lindsey's CAPTIVE BRIDE, from the escape attempts, to the rival sheik, to the fact that the sheik is half-white. I'm sure Lindsey was probably inspired by THE SHEIK, but wanted to write a modern, sexier version (now with 80% less racial stereotypes!). She succeeded - I vastly preferred CAPTIVE BRIDE to this. I'm giving THE SHEIK two stars instead of the one it probably deserved because the constant melodrama could sometimes lead to unintentional hilarity, rather like Louisa May Alcott's rather bodice-rippery and decidedly lesser-known book, A LONG FATAL LOVE CHASE. Yes, the Louisa May Alcott of LITTLE WOMEN fame. Talk about another book that also desperately wanted to be dirty...

P.S. Another way you can really feel the 1910s is the fact that everybody in this book chain-smokes, often at hilariously inopportune times. When Diana escapes the sheik, she stops under a palm tree and lights up. #SmokingBreak