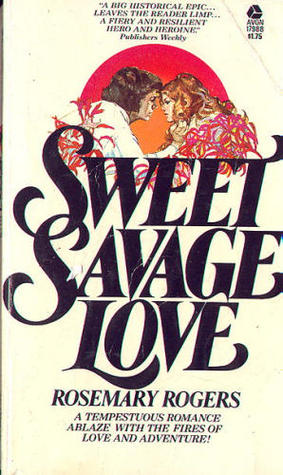 💙 I read this for the Unapologetic Romance Readers' New Years 2018 Reading Challenge, for the category of: Antebellum/Civil War/Reconstruction Romance. For more info on this challenge, click here. 💙

Every time someone says romances are too light, and that they don't have enough action, I want to throw a bodice ripper at them. SWEET SAVAGE LOVE is one of the early bodice rippers, when the authors were still working out the formula, and was published just two years after THE FLAME AND THE FLOWER.

SWEET SAVAGE LOVE is a Western romance set amid the backdrop of the Franco-Mexican War and the American Civil War. Ginny Brandon is the daughter of a Southern senator who has a vested interest in the Confederates beating the Union. After spending her childhood in France, growing up in the lap of luxury, she is now joining her father on his trip to petition the sympathetic French.

Steve Morgan is a Yankee spy, as well as a Juarista (the people who supported Benito Juarez and were very much against Emperor Maximillian's presence in Mexico). He has signed up with Brandon's men under false pretenses, intending to lure them to bandits who will make off with the gold they're planning on using to bribe the French.

If you think these two romantic leads are at odds, oh boy, you have no idea. SWEET SAVAGE LOVE was a 600+ page psychodrama that was less about love than it was about Stockholm syndrome, hate sex, and physical and psychological torture. I thought reading one of her later books, SURRENDER TO LOVE (published in 1982), had adequately prepared me for SWEET SAVAGE LOVE, but I was woefully mistaken. As dark as SURRENDER was, it couldn't hold a candle to SAVAGE.

SWEET SAVAGE LOVE has a bitingly realistic portrayal of war, in the sense that it doesn't shy away from the squalor of living life on the run, in the field, or in prison; the desperation of men in tough situations, and the cruelty they'll inflict when they're either cornered or on a power trip; and the violence (physical and sexual) that occurs in all of the former situations. Steve is party to all of these, and his sexual encounters with the heroine are often unconsensual (in fact, when they first meet, he mistakes her for the prostitute he thought he ordered). He kills without mercy and sleeps with every female character who appears in this book, including the heroine's stepmother(!), his grandfather's servants, and his own godmother. The heroine also has a number of partners who aren't Steve, but, again, a lot of these are unconsensual, and she doesn't really enjoy herself even when they are.

The western setting is truly glorious. I love the detail. The sensory descriptions. This was what won me over in SURRENDER TO LOVE, when Rogers lovingly details what it was like to be in Victorian-era Ceylon. She brought the setting to life, as she does her (albeit to a slightly less vivid and sympathetic extent). SWEET SAVAGE LOVE is very un-PC and if the sex scenes aren't enough to get you, the racist stereotypes and incredibly poor Spanish translations will. Seriously, the Spanish in this book was awful. It's only my second language and I don't speak it too well, but I know enough to know that "mi casa esta su casa" is not correct, that La Caseta does not mean "The Little House" (she meant "La Casita"; La Caseta means "The Booth"), and that it's "abuelo" and not "abielo." How hard would it have been to get someone who speaks Spanish to look this over?

Still, despite everything, until about 75% in, this was going to be a 5-star book. Ginny was a spitfire. Steve was fascinating - in addition to being involved in two wars, he was also affiliated with the Comanche people (and married one at 15), half-Mexican and fluent in Spanish, fluent in French, and the grandson of an incredibly rich and influential plantation owner. The problem comes when Ginny is captured by the French and Steve bursts in to save her and both characters (but especially Steve) are subjected to some of the worst horrors imaginable, and due to a series of incredibly long misunderstandings, each blame the other for their predicaments. For the next 15% of the book or so, the hero and heroine remain apart, wallowing in misery and being tortured emotionally, sexually, and psychologically. It was agonizing, and I could hardly stand it. The last time a romance book brought me to my knees (figuratively) was probably in Patricia Hagan's Coltrane saga, particularly in LOVE AND WAR, where she seemed to delight in torturing her heroine. Rosemary Rogers does the same with Steve and Ginny, in a gigantic misery-fest that finally blows out around the 90% mark.

This book is not for everyone, and it's hardly a traditional love story, but if you're into bodice rippers and edgy reads, SWEET SAVAGE LOVE is a fantastic book. There really is nothing like it and the story is so epic, and Rosemary Rogers makes you suffer and sweat for that HEA. I'm really glad that my friends Korey and Heather joined me in this buddy read; it forced me to endure and keep going!

(Speaking of "keeping going," I happen to have book 2 if anyone wants to join...)