Look at This Fucking Hipster by Joe Mande 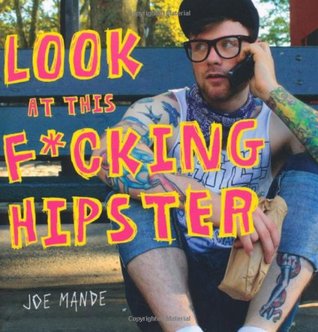 I bought this book when I was in college and hipster/scene culture was at an all time high. I loved to sneer about hipsters, and I think that was probably because I was a hipster. I had about six flannel shirts in my closet and would make "pixel art" of 8-bit video game characters out of Post-It notes on my wall (and when I posted the pictures to Facebook, my parents yelled at me for wasting the Post-Its). I would go to record stores and buy CDs of 90s indie bands like Sixpence None the Richer and The Innocence Mission. I wore these thick-framed black glasses similar to the one that the dude on the cover of the book is wearing, and took "artistic" selfies in front of the poster of a Japanese woodblock printing I had in my dorm, or against the 8-bit video game Post-It art. I wouldn't go to a coffee store unless it was "independent."

I was, in other words, a basic AF hipster.

Reading this book is pretty hilarious because it's basically a retrospective ode to the early-to-mid 2000s. Some of the clothes in here are more emo than hipster, particularly the chunky side-swept bangs with the striped extensions. That's, like, classic emo/scene fashion. I was reading the reviews for this book and it looks like the biggest problem that people have with this book is that it not only isn't nice, it's also not PC. I would agree with that. A lot of the captions are definitely mean-spirited, and some border on ageist, racist, and homophobic. But then, a lot of humor toes the line of what's OK to say, and what it ultimately comes down to is intent. I don't think this guy who created this blog (and this book) is a bigot: I think he's a snarky dude who embraces the anonymity of the internet to make people laugh with his off-color brand of humor. Enough people liked it that he ended up getting a book deal (and in the intro to this book he seems as mystified about that as everyone else). I like it, because it captures the zeitgeist of the 2000s, including hipster, emo, and party/raunch culture. I may not agree with it personally, but it is an accurate reflection of my time in high school and college.

Also, that Beans guy at the end was kind of hilarious. He seems like such a great guy. People were posting unflattering pics of him dressed funny at concerts, and instead of getting offended, he was delighted when the creator of this book contacted him and asked him to do an exclusive photo shoot. Which he did. (I hope he got paid, or something, but maybe Beans is a pro-bono kinda dude who doesn't believe in selling out, in which case, rock on, Beans.)

In the meantime, I'm going to keep drinking my fancy cocktails with bitters, reading my hardbound copies of old classics salvaged from thrift stores, and listening to my OK Go and my Arcade Fire and my Rilo Kiley, while living it up in San Francisco, Hipster Capital of the West Coast (well, apart from Portland). You can laugh at us all you like, but we have artisinal salads, flourless vegan chocolate cake, and cute shoes with cats on them.