Persepolis 2: The Story of a Return by Marjane Satrapi 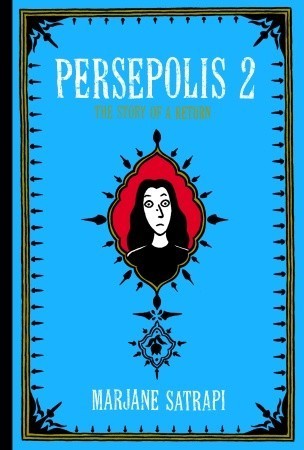 When I read the first volume of PERSEPOLIS, people told me that I had to explore this author's other work. Luckily, I bought volumes one and two of PERSEPOLIS together, so I could immediately jump from one to the other. While the first book primarily takes place in Iran during the Islamic Revolution and then, a few years later, during the Iraqi Invasion, the second book is about Marjane's coming of age in Austria: the place her parents decided to send her, where she would be safer from the war.

Marjane ends up in several places: friends' homes, a church (although she was thrown out for talking back to the nuns), hostels, even homeless on the streets. She writes about what it was like seeing a full grocery store after the scarcities in Iran, and the difficulty in living in a place where she didn't speak the language. She also writes about some of the racism she experienced, and her first feelings of shame for being Iranian because everyone saw them as "terrorists" because of the news.

I really enjoyed this book, because Marjane is so straightforward about her experiences. I think in memoirs there is a tendency to portray yourself as selfless, but Marjane portrays herself as honestly as possible, even at the cost of likability. One moment that particularly stuck out at me was when she accuses an innocent man of making lewd advances towards her in order to avoid getting in trouble with the Guardians for meeting a boy. She and her boyfriend laugh over the story but when she tells it to her grandmother, she yells at her for the first time in her life and says she's shaming her uncle's memory (the uncle who died for seditious activities that were against the Islamic Revolution). It was a relatable moment, because I think we have all done things as teens that we thought were humorous or fun that ended up bringing us shame later because of how they disappointed our families.

I didn't cry while reading PERSEPOLIS 2, although I came close at the end of the book, when she talks about seeing her grandmother for the last time. However, that doesn't mean that PERSEPOLIS 2 is any less touching. I liked how she described living as an expatriate, her encounters with her friends (and her enemies), and her experience with sex, intimacy, marriage, and divorce from both a Western and an Iranian perspective (and how the two frequently came into conflict). At one point she says something like "To the Westerners, I was an Iranian; but to the Iranians, I was a Westerner" which I thought was a great way to describe the feelings that many people with dual citizenship or people who are multiracial have of belonging to a group that is separate from those singular identities.

This is such a great series. It's easy to see why it was made into a film: the style, the narration, the content - it's all so compelling. As I said in the first book, if you're interested in learning more about Iran and enjoy memoirs written by interesting women, PERSEPOLIS is definitely a must-read.