Summer of the Unicorn by Kay Hooper 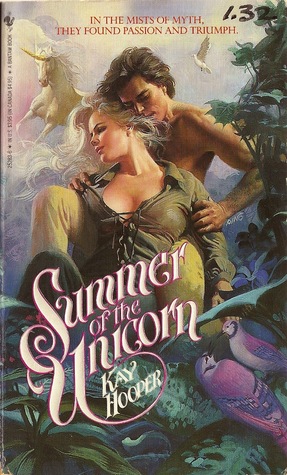 💙 I read this for the Unapologetic Romance Readers' New Years 2018 Reading Challenge, for the category of: Fantasy Romance. For more info on this challenge, click here. 💙

This is either the best worst book I ever read, or the worst best book I ever read. First, the new cover doesn't do this book justice at all. What's with the 1920s-style hairdos and outfits? It made me think this was going to be some lame period piece a la, "Oh, darling, I'll never forget that one summer in Tuscany, the one where we were both as wild and as free as wild horses! Truly, my love, it was the summer... THE SUMMER OF THE UNICORN!"

Yeahhhh, no. I'll do anything for love, but I won't do that.

But I'm as basic as they come, and one thing us basic girls love is unicorns, and when I saw the word 'unicorn' in the title as I was gleefully scrolling for and requesting Netgalley ARCs, I one-clicked that book without even reading the summary. Because I like to live dangerously. Then I changed my mind and decided to let my ARC expire, but first I went to Goodreads to check out the summary... AND I SAW THAT GLORIOUS BEAUTY THAT YOU SEE BEFORE YOU!

Holy cover art, Batman! Was this that holy grail of romance wtfery? An 80s romance?

YOU BET YOUR BLACK LATEX SHIRT IT WAS, BATMAN.

Forget letting this precious slip through my fingers. I set aside The Chronicles of Celery, Queen of the Sues, and read this like I was doing the Richard Simmons version of reading, with a one, and a two, and a three, TURN THE PAGE, and finished it within a matter of hours. Oh, don't get me wrong. It was baaaad. But it was the kind of bad that is so utterly entertaining that it becomes the standard of bad to which all books aspire. Truly, my friends, this is The Room of romance novels.

So what's it about? Two princes, fighting over a throne, on a planet called "Rubicon." Their names are Boran (which sounds a lot like Borat, which I am going to call him for now on) and Hunter, which is a fairly common name, so I'm going to call him Basic Bro. The rules of inheritance state that the firstborn gets the throne but since Borat's mother was the only witness to his birth, that's a contested matter. Also, nobody really likes Borat that much. He's mean to his concubines (who all lust after Basic Bro's manly, yet utterly considerate touch), likes to hurt people for fun, and oh, part of him was burned in a fire so he has scars, and everyone knows that if someone in a romance novel (or a soap opera, or a telenovela) has a scar, that's basically the equivalent of a bright neon sign that says, "THIS PERSON RIGHT HERE, THEY'RE THE EVIL ONE. AVOID." And, as with warning signs in real life, idiots cheerfully disregards them until it is Too Late.

To resolve this matter, the council on Rubicon decide that the brothers must go out into the world to bring back proof that unicorns exist and the one who does will get the throne. So Borat and BB get on space-ships and go to another planet(!) in order to find unicorns. Which is ridiculous, I know. I love it. BB goes to this place that I believe was called Styx, where there is a man who has found the unicorns but at terrible cost: he is now haunted and also minus one tongue, because when he killed the unicorn to get its horn, something attacked him in kind. The Keeper of the unicorns: a powerful, magical woman who is rumored to be immortal, & guards the unicorns' lives as if they were her own.

BB goes to the unicorn planet, where he promptly falls off a cliff and almost dies (LOL). He is saved by the Unicorn Woman, who is named Siri. Yes, like the phone. I love that, so she's just going to be Siri, but please imagine everything she says being said in Robot Siri's voice like I did if you choose to read this book, because it becomes ESPECIALLY funny during the parts where she refers to herself in the third person. Siri knows that he came here for the unicorns and doesn't understand why she saved him (dude, because he's hot). Many arguments ensue, about whether or not to bang (only virgins can communicate and protect the unicorns), but also about whether it's good to reveal the existence of the unicorns because "good" people don't need to see them in order to appreciate what they represent, and "bad" people will want to kill them and harness their magic for themselves.

MEANWHILE, Borat has assembled a team of Huntsmen but he also thinks Siri is hot. So he uses his evil magic amulet to psychically roofie her, forcing her to do sexual things with him and then blanking her mind out later. All the while, he giggles evilly to himself about how he's going to force her to sleep with him under this magic spell, making her think she's doing some hot, angelic dude, and then at the moment of climax, when her virginity is no more, he's going to let her see who he really is - and then he's either going to kill her or make her his queen, he hasn't decided. All he knows is that he wants her magical virginity powers for himself (no, seriously, he says something that is basically to that effect, in almost those words), and that the unicorns must die for his benefit.

This psychodrama spans 250 pages, and it drags like nobody's business, because between all the masturbatory villain scheming (sometimes literal masturbation being involved as he plots), Sexy Naked Baths, to-bang-or-not-to-bang philosophizing, and UNICORN passages(!), not that much happens. Borat is really the driving force behind this novel, because he's so deliciously evil that this feeling of dread totally overshadows all the unicorn frolicking. Also, the mythology of this world is weird AF. Siri is the daughter of a mermaid and a mortal man, has psychic powers, lives in a valley where there is an OCEAN inside of the nearby mountain, and in addition to unicorns, sand cats, panda bears, dragons, and Arctic wolves also live in this place, and all in harmony, besides.

ALSO, in a surprise Planet of the Apes-esque twist, it turns out that the Unicorn Planet is actually Earth. The same planet Borat and BB's people fled 10,000 years ago after they destroyed it. WHAT A SHOCK! Primarily because, to my knowledge, we don't have any ocean-filled mountains. But what do I know, I'm not a geologist. Maybe this is some super secret bit of info only geologists know.

What I do know is that this book is weird AF and also pretty terrible. The twist at the end, the deus ex machina regarding BB and Siri's consummation, the unicorn dances, the naked sexy baths, the psychic roofies, the evil magic amulets, the virginity magic, and also Siri's mermaid mom who lives in the ocean-filled mountain were just huge piles of whip on this wtfery sundae. Even funnier is the fact that Kay Hooper now writes romantic suspense novels, and appears to have distanced herself from the fantasy and paranormal novels that she wrote in the 80s and 90s. From what I have observed, they appear to be rarely mentioned or read by her fans, and several are out of print.

Despite its awfulness, I enjoyed this book. Fantasy bodice rippers are somewhat rare, and their covers are often glorious (just check out this cover for ENCHANTED PARADISE, which looks like a Lisa Frank-themed porno shoot). I'm glad that more and more authors these days are releasing their backlists, because while many people these days lose their sh*t over being the first to receive and review sparkly new titles from 2018 (and if they're REALLY important, 2019), I'm an old-fashioned kind of gal who likes to snoop in authors' cobwebby closets to find the titles that they'd like us to forget they wrote (Iris Johansen, I see you and your half-forgotten HRs. Lisa Kleypas, GIRL, I KNOW you wrote a bodice ripper back in the 80s, and I see you too).