I Can Has Cheezburger?: A LOLcat Colleckshun by Professor Happycat 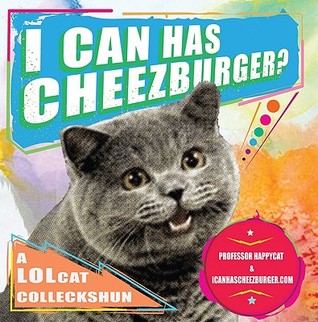 After reading and reviewing the book UNDERWATER PUPPIES earlier this week (squee), it seemed only fair that I turn my attention to cats. Specifically LOLcats. I love memes. I love cats. When their powers combine, magic happens. Plus, I recently watched this Vox video called The reason every meme uses that one font, which is about the history of the Impact typeface and its use in memes.

I CAN HAS CHEEZBURGER is this crowd-sourced meme dumping site where people submit pics of cats and can vote for their favorites (and yes, they mostly use Impact). I used to spend hours browsing the site - some of them are incredibly funny. (One of my favorites was the "crazy cat lady starter kit.") I guess the site was popular enough that the creators landed book deals, kind of like the LOOK AT THIS FUCKING HIPSTER guy, or the minds behind THE PEOPLE OF WALMART website and their book.

I've read several of these blog-to-book deals, and for the most part, I've found them lacking. I think it's because a lot of these blogs are crowd-sourced, so there's a lot of edgy humor (which comes from being anonymous). The people who publish the books aren't anonymous and they're trying to appeal to as many people as possible, so what often happens is that the jokes inside are very tame and inoffensive, in order to keep the books "family friendly." My brother got me a Grumpy Cat book a few years ago and it was the same issue - Grumpy's sass was dialed way down. She went from Give-No-F*cks Granny to mopey teenager, and, well, it just wasn't very funny.

In I CAN HAS CHEEZBURGER? it was like the curators purposely chose the most bland and inoffensive memes they could find, and a lot of them were the kinds I'd skim over without a thought. There's a handful of genuinely funny pictures in here, but for the most part it's just things like "Invisible Treadmill" or "Insert Cheezburger Here." Comedy thrives on edginess and the unexpected, and when you take that away, you get bland, forced humor that your five-year-old might clap at if nothing better is on.