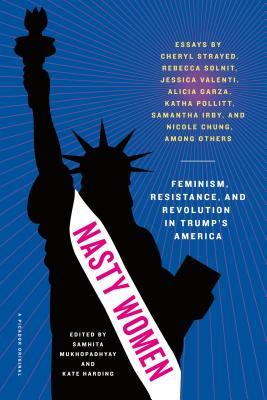 The last presidential election made me very upset. Like many Americans, I asked myself, "How did this man get elected?" But also, "Why were so many people willing to overlook all the terrible things he said? Why did 53% of women vote for him, despite the remarks he made about women of all kinds?" And, most terrifyingly of all: "How did we become so willing to turn a blind eye to, or, worse, actively participate in or encourage acts of aggression and hate towards those who are different?"

NASTY WOMEN is a collection of essays from various feminist writers about Hillary's campaign, Trump's victory, and what they believe the aftermath of the election means for women - and for Americans, more broadly.

I've included a break-down of all the essays in my status updates for this book on Goodreads (all 47 of them), but here is a collection of what I see as this book's "greatest hits."

"Are Women Persons?" by Kate Harding discusses the flaws of some of the pioneering feminists, like Susan B. Anthony, who was definitely a product of her times in that she could be racist as f*ck. It cautions that historically, feminism was a white upper-class women's issue; and while these women helped paved the road for where we are now and their frustration at being held back by condescending men still resonates for many, we must not make their mistakes by throwing people of color under the bus or failing to include them when advancing feminist issues.

"Trump, The Global Gag Rule, and the Terror of Misinformation" by Jill Filipovic goes into Trump's extremely cruel expansion of the gag rule, which basically penalizes foreign groups from discussing or providing abortions and birth control to foreign countries. It's heart-breaking, but powerful.

"Is There Ever a Right Time to Talk to Your Children About Fascism?" by Kera Bolonik is written by the granddaughter of holocaust survivors and discusses how many of Trump's supporters and campaign tactics mirror that of fascist Germany during WWII.

"Permission to Vote for a Monster: Ivanka Trump and Faux Feminism" by Jessica Valenti turned out to be one of my favorites. It's a discussion of the women conservatives champion - women who are content to play by the rules set by men and who don't want to make waves, and condemns conservative women who co-opt "feminism" to push their own agendas. It helps explain the mentality of the white women who voted for Trump.

"X Cuntry: A Muslim-American Woman's Journey" by Randa Jarrar was so weird and so unlike any of the other more traditionally formatted essays in this book that it ended up being totally memorable. It's a series of dream-like diary entries written by a Palestinian immigrant discussing her encounters with racism in the toxic sociopolitical climate leading up to Trump's election.

"Trust Black Women" by Zerlina Maxwell gives the reasons black women overwhelmingly (94%) voted for Hillary Clinton. It's a good essay. There were several other similar essays in this collection, but I felt like this one was the best. Maybe because it ends on a note of hope & I'm a hopeless fool.

"All American" by Nicole Chung ends this book on a strong, resonant note. Chung is the adopted daughter of two white people (she's Korean-American). She talks about how the aftermath of the election has affected her, and her fear for her children because of their ethnicity and also because one of them has autism. She discusses the countless microaggressions she encounters from people who are so ignorant that they don't even realize they're being offensive, and the tense discussions with her conservative parents who voted for Trump and regard anyone different as suspicious.

This really is a fantastic collection from a varied and talented group of essayists. I would honestly recommend this book to anyone who was #WithHer and is feeling angry, scared, hopeless, or sad. The editors went out of their way to include a diverse array of women with many different views when it comes to the dual but related subjects of liberalism and feminism. I heartily recommend it!