Flame of Savannah by Maggie Lyons 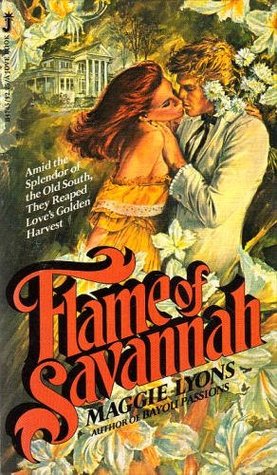 I love the covers on these vintage romance novels from the 70s and 80s and FLAME OF SAVANNAH was no exception. You can imagine my surprise and delight then when I found the entire series on Amazon, for 99-cents each. I bought all six books because I learned my mistake last year, when Patricia Hagan's books were pulled from Amazon Kindle without warning! I had only bought books 1-3 and was planning on buying the next five volumes after I'd saved up some, and when I came back...they were gone! ...GONE!

I WAS NOT GOING TO MAKE THAT MISTAKE AGAIN.

Perhaps this optimism was unwise, but what can I say, but #FOMO. As it turns out, it may have been a good decision because I really found myself enjoying FLAME OF SAVANNAH quite a bit. Maggie Lyons is actually the penname of author Michael Llewellyn, so I was prepared for some Jennifer Wilde-type high-jinks, and an OTT plot laden with all sorts of crazy sauce adventures starring a promiscuous heroine who's basically sex on legs, as she navigates the carnal, un-PC world of the Antebellum South. I have read enough bodice rippers that it would be foolish to have expected anything less...

But - FLAME OF SAVANNAH is not a bodice ripper. If anything, it's more like one of those Southern Gothic novels from the 70s that Jennifer Blake used to write (except with more sex). The plot revolves around four characters - Cathleen, Melinda, Geoffrey, and Aaron. Cathleen and Melinda are best friends in Savannah, and move about in the upper circles of society on the cusp of their respective debuts. Then the arrival of two very different men shatter their previous plans, threatening both ruin and passion. Aaron is a Jewish architect, much to the horror of Cathleen's parents. And Geoffrey is a member of the English nobility...although he and his bodyguard have a dark secret.

The last half of the novel feels more Gothic than the first. The first half has a GONE WITH THE WIND feel (pre-war) and is charming but bland. The second half is all action, and involves creepy castles with torture dungeons; yellow jack (yellow fever) outbreaks; voodoo; brothels; sex scenes; family secrets; murder attempts; revenge plots; escapes; misunderstandings; inheritances; and death. (I feel like I'm summarizing THE PRINCESS BRIDE, the way that grandfather did in the movie.)

I know a lot of you guys following me swear that bodice rippers/vintage romance novels aren't for you, but I urge you to pick this one up if you're at all interested in reading these types of books. I really loved the female characters in this book - they had great dimension and were flawed and interesting, and the friendship between Cathleen and Melinda was quite sweet. I also loved how the author portrayed the etiquette of the South, especially with "frenemy" type women. The relationships between all the various characters was utterly fascinating.

P.S. I thought it was really interesting that this book included the lyrics to "Lay This Body Down" at one point because I literally just read another book that included those lyrics too called BELOVED ENEMY. I Googled it, and it looks like it was a slave song from the South, so that makes sense. Anyway, I just thought that was interesting. I like it when historical details sync up like that!