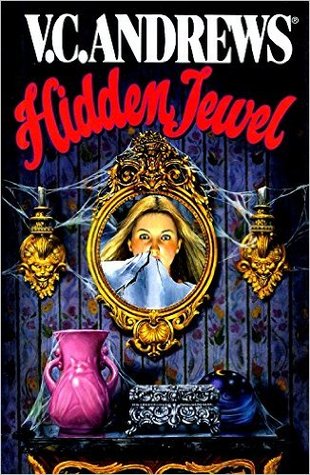 "V.C. Andrews" as we knew and loved her died in 1986. Subsequent titles are published by a ghostwriter hired by the estate, Andrew Neiderman. The first Neiderman/Andrews book I read was one of the later titles published in the mid-2000s, when I guess he decided that he gave no f*cks and was going to write whatever, because it was about a creepy school and not a Gothic family drama - what. It actually put me off Andrews books for a while, because it was so bad.

One of my friends intervened and told me that what I had read was V.C. Andrews in the same way that New Coke is Coke - AKA, not. So I went back and read MY SWEET AUDRINA and FLOWERS IN THE ATTIC and was blown away at the difference; V.C. Andrews is not high literature, but she writes trash with glitz and glam and rhinestones the hell out of those old musty newspapers, so even though you know that you're reading garbage, you're reading sparkly garbage (which is better).

With that in mind, I decided to go back and revisit "V.C. Andrews" (as done by Neiderman), thinking that the early books - the ones written when he actually still gave f*cks - might be better.

HIDDEN JEWEL is actually the fourth book in the Landry series, about Ruby's daughter, Pearl, but I decided to treat it as a standalone and just dove in and man is it insane. Pearl is a socialite with a popular boyfriend and a graduation party coming up, and she wants to be a doctor. Her boyfriend dumps her for an evil slutty type on the day of her party since she doesn't put out. After that, every male character tries to sexually molest Pearl, including her father (well, sort of - he just disrobes, thinking she's her mom, and pulls some "Paint me like your French girls"-type Titanic BS which, understandably freaks Pearl out), an interning doctor (aka, Dr. Bad Touch) who invites her to study only to lecture her about vaginismus and dyspareunia and then attempts to determine whether or not she's frigid (the leading cause of vaginismus, according to him) by undressing her and telling her she has "wonderfully healthy skin" (86), a creepy swamp dude who tries to pull some Craster-type BS by abducting her and forcing her to be his shed-wife via a chain and some beatings, and then the actual patriarchal-type love interest who's supposed to be a good guy but comes across as a not-so-smooth-talking-creep circa 1959.

It's got all sorts of wacky hijinks, like family curses, voodoo (Pearl's grandmother is a traiteur), deaths, alcoholism, and sex, all set against the backdrop of Louisiana, with some half-hearted attempts to imbue it with some Cajun culture. I fully expected to despise this book like the other "V.C. Andrews" book I read, so you could color me surprised when I actually found myself enjoying this trashy dreck. Neiderman is trying so hard and it's actually endearing, because he is almost successful at capturing that elusive V.C. Andrews Classic style and there are some genuinely beautiful descriptions in here, mostly of the food and the nature variety.

The sex? Not so much.

We exploded against each other. I bit down on his ear so hard I thought I tasted blood (279)

...it was a long, flowing stream of passion that climbed higher and higher until it burst in a waterfall, pounding rocks below again and again and again, each time punctuated with a bigger, happier Yes.

I would read the other books in this series, and maybe also the Cutler & Casteel series, too. I'm digging this early Neiderman vibe. It's not as good as the original, but at least it's trying.

I'm not sure who the creepy dude in blue is, but I think it's supposed to be Dr. Bad Touch(?).