The Queen of Katwe: One Girl's Triumphant Path to Becoming a Chess Champion by Tim Crothers 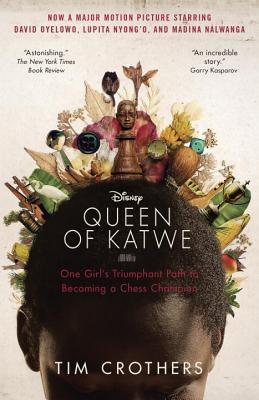 Chess is a lot like a language: the pieces are the phonemes, and their movements are morphemes. The positions they make together on the board are like sentences and phrases, and a talented enough chess player can really make a statement.When you think about it, chess is downright magical. A universal language that transcends geographical and cultural boundaries. A language so universal that even villagers in rural Uganda can speak it.

Most of the nonfiction I read tends to run along the "girl power" route, so obviously I was thrilled when I found a girl power book that was not just about one of my favorite activities but also about a woman of color competing in a game that is dominated by men. It's been turned into a movie, too. A movie I desperately want to see, which stars Lupita Nyong'o. How could this not be good?

Well...I noticed a lot of the reviews for this book were not so great. That surprised me, because books like these usually have great reviews because people find them so inspiring or interesting. As I began to read the book, I began to understand why so many people had reservations about QUEEN OF KATWE. I'll list the reasons out as I go and talk about them, because the reviewers really hit the nail on the head in this case.

1. Phiona Mutesi is not actually a grandmaster. There's an alternate title of the book, "The Queen of Katwe: A Story of Life, Chess, and One Extraordinary Girl's Dream of Becoming a Grandmaster." It never explicitly states that she is a grandmaster, but it could be perceived as misleading. Maybe that's why it changed. The other title is more attention-getting, but I like this one better. It really captures her journey and ambitions in a sentence. And her rookie-status actually didn't bother me that much, because I'm a rookie player too, and I don't think it's a stretch to call her a "champion" since she really is the best chess player in Uganda...even if that's setting the bar low.

2. This book is not just Phiona Mutesi's story: This is true. Most of the book is about Phiona but there are a lot of lengthy digressions. We learn about the history of Phiona's teacher and the leader of the Sports Outreach program that allowed chess to be possible for Phiona and her friends, Robert Katende. We also learn about the white people who funded the charity and the white people who created the scholarship that allowed Phiona to go to school. These parts were interesting, especially Katende's, but they weren't Phiona's story. I could see why people were annoyed.

3. They took religion out of the movie version/this book is very preachy: Religion plays a fairly big role in this story because the Sports Outreach program was a Christian charity funded and founded by Christians. Robert Katende gives sermons targeted for young people that wouldn't be out of place in a Veggie Tales cartoon. I didn't mind this. Religion can cause people do want to do great things; in the right hands, it's a tool that lets people plunge the depths of spiritual goodness. I admire the faith and devotion of those who use their belief in God for good. That said, I can also understand why religion was left out of the movie. As controversial as it is, I think the message is that you don't have to have religion to have a moral compass that points you to better the world. Being secular makes the story more universally accessible.

4. The writing was not good: I sort of half-agree on this one. The writing was not high-brow or particularly polished, but the author got the story across in a way that was readable and interesting. Could it have been organized better? Probably. Honestly, though, it wasn't bad. Phiona is such an interesting subject and I liked how the author kind of got swept up in chess, too. He makes it sound interesting, which is hard to do in books about chess (reading about it just isn't that interesting).

So yeah, the book has some flaws, and Phiona was built up to be a little greater than she actually is (at least at the moment), but I liked THE QUEEN OF KATWE. It's got girl power and chess, and it's basically a biography of a girl's hopes and dreams as they're in the process of being fulfilled. We don't know if she'll make it and neither does she, but she's working as hard as she can, against all of the odds, to make it happen. If that's not inspiring, I don't know what is.