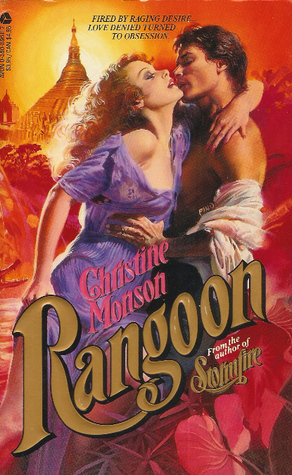 Christine Monson is pretty well known in the bodice-ripper genre, primarily for her first book, STORMFIRE. But that book is hard to find and expensive to buy, so I had to settle for one of her later titles. I picked RANGOON, because of that gorgeous cover. I'm a shallow, shallow betch, I know, but look at that sunset palette, the utterly romantic posing of the h and the H, and the minarets in the distance.

RANGOON offers another plus: it's set in Victorian-era Burma (or Myanmar). The heroine, Lysistrata, is named after the Greek play by the same name. Incidentally, LYSISTRATA is my favorite Greek play because it's so damn funny; Aristophanes trumps Sophocles any day of the week - I'd much rather read about a bunch of women protesting a war by refusing sex with their menfolk than about an incestuous psychodrama). She lives up to her namesake, too. She's plain and headstrong and doesn't have time for your games.

Her father is a doctor who is serving at the Rangoon hospital. Lysistrata ends up helping him out, and comes into her own beauty with the help of a catty old lady who decides to take her under her wing. The result is a flood of suitors, but the only one that really holds her interest is Richard Harley/Ram Kachwaha, who is half-Burmese, half-English. He's also a total rogue and might or might'nt be involed in some shady dealings.

I wanted to like Richard/Ram (Ramchard?) because for a while, he reminded me of a morally gray hero a la Anne Stuart. You don't see a lot of decent Gamma heroes, so I was pleased to see him skate the line between dangerous and charming, and how it set Lysistrata off guard. I liked Lysistrata in the beginning, too. She was independent, and cunning and witty, and she was considerate and kind.

The problem is that their characters are hugely inconsistent. They behave very differently at different points of the book, with personality shifts that don't really make any sense. Also, Lysistrata succumbs to the temptation of all heroines to act helpless and cry and make protests about traitorous bodies. She wasn't as bad as most, but it was a complete 180 from what the story was building her up to be, and I was very disappointed. Toward the end, there's yet another shift as both characters become fatalistic, and often start talking about death in romanticized, disturbing terms. It's very strange.

The best part of this book is probably the writing and the details. There were some beautiful turns of phrase in here, and times it could be very passionate. Her descriptions of the jungles of Burma were exquisite, and I love how she captured the hypocrisy of the white, foreign expatriates living in Rangoon. Monson had a quick wit, and it showed in the dialogue. She's also really good at fight and action scenes, and isn't afraid to show gore. After the opening, the portions about Khandahoor were probably my favorite, although parts of the trial in the third act were pretty hilarious, too.