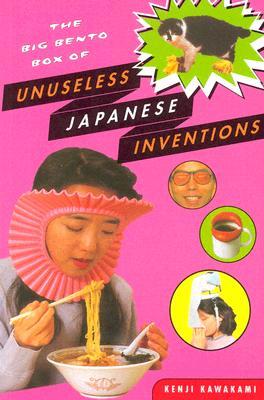 The last thing we need is another word for "useless junk", right? Japan doesn't think so! In Kenji Kawakami's hilarious picture book, he talks about chindogu - items that were invented to solve a problem, that look like a great idea...until you stop for a moment, really think about it, & realize, no, it's not a great idea.

Cases in point: mop booties for your cat; alarm clock headphones; portable bus/train seats; full body umbrellas; tongue covers to protect your mouth from hot food; and bathtub sake warmers, to name a few. Chindogu look like things you might expect to see in daytime TV infomercials or on the Home Shopping Network, but one of the chief tenets of chindogu is that they cannot be sold. Bad news for the selfie stick, because its precursor is in here!

This is a re-read, but THE BIG BENTO BOX OF USELESS JAPANESE INVENTIONS is such a funny and unique book that it's one of the rare books that I actually kept instead of donating it like the rest. The photographs are high quality and have a slightly retro look to them that makes it feel like they were taken in the 90s.


Speaking of photographs, I have to wonder if the Konica camera was a sponsor of this book, because the Konica mini appeared in these pages every time there was a camera chindogu device (and there were a lot - also shoes). Either way, I'm sure they appreciated the publicity.