Mating of Hawks by Jeanne Williams 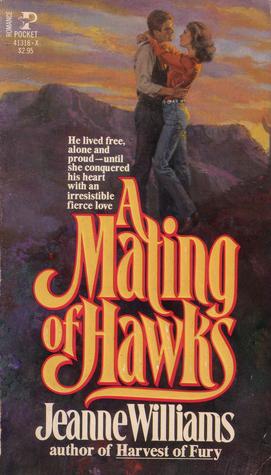 I'm that weirdo who doesn't hide her racy romance novels behind the safe, bland screen of a Kindle - I read them in public, even if they've got heaving bosoms on the cover. (The only exception are books with covers that are straight-up pornographic, because I will not be held responsible for traumatizing maiden aunts riding on the bus.) When I saw A MATING OF HAWKS on the freebie table at the library, I snatched that sucker up faster than you can say, "Hot damn!"

Jeanne Williams has written a lot of books but has mostly gone under the radar. I'd had my eye on several of her historical fiction works that have been rereleased for Kindle, but the price - $6.15 - gave me pause. This seemed like the perfect opportunity to give this author a whirl and see if her writing style jibed with my reading tastes.

Second, another caveat: spoilers - there will be many spoilers! Why? Because this is a rather esoteric little book, and bodice-rippers and vintage roms are the (main) exception to my attempts at spoiler-free reviews. Part of what makes books like these so fun/awful are the dirty deets.

And yet one more caveat: there are triggers in this book - animal deaths and sexual assault/rape.

A MATING OF HAWKS is set on a ranch in Arizona, in the 80s (or possibly the late 70s). Tracy Benoit is a journalist who is attempting to overcome a recent attempted rape. The last thing she needs is more psychological trauma, so what better time for her to get...more psychological trauma. Her foster father/distant uncle, Patrick, is blind, paralyzed, and dying, and wants her there in his final days.

Also at Rancho del Socorro are her two distant cousins, half-brothers Shea and Judd. Shea hates women because he's been hurt. Judd "loves" women to the point where he won't take no for an answer. Both are misogynistic d-bags, so of course, both are love interests. I really did not like these love interests. When Shea sleeps with her, he makes a point of drilling in the fact that he isn't looking for a relationship or commitment, even though she's in a fragile emotional state, recovering from her recent trauma and the slow death of the only father figure she has.

Judd is a different, smelly kettle of fish. He's always forcing kisses and unwanted physical contact on her. He randomly sneaks into her house in the night (Shea does this too actually). He's carrying on an affair with Patrick's (younger) wife, Vashti, whom he insults freely. We find out that he also had an affair with Cele, Shea's ex-wife. Oh, and toward the end of the book, he rapes Tracy. Several times. Even though Tracy made a point of confiding in him about it early on. No words.

The best part of this book is actually something that I felt was skated over toward the end to make room for the "romance": the rivalry for the brothers and the workings of the ranch. Arizona is in the middle of a massive drought and Shea knows that the groundwater won't last. He sees it as his responsibility to make sure the ranch flourishes so that one day, his grandchildren will still have a living, sustainable farm. Judd, on the other hand, is greedy for profit and has more cattle than his portion of the ranch can comfortably hold. He's allowed them to overgraze, and in the dry soil, the cattle are pulling up the grass by the roots. Shea, on the other hand, is allowing the grass on his portion to grow back, giving the earth time to recover. Judd wants to use his lease, but Shea refuses unless Judd sells some of his herd. Which he refuses to do, instead entering into legal purgatory, trying to get Shea's lease overturned. Pettiness and underhanded schemes ensue.

Also, part of this book made me tear up because there's a side story where Tracy and one of the Native American farmhands go to rescue a wounded eagle and find out that it's being used to fight against cats. This little Mexican girl finds out that her brother entered her pet kitty in the fight and rushes into the arena, heartbroken, to see its guts dashed out all over the ground. She cries. I cried, too.

The details into ranch life are fascinating and I loved the mixed ancestry of the family - Mexican, Native American, and Irish/European - and how it's affected their culture, traditions, and way of life. I do think there was a decent story in here, but the love interests and romance sort of killed it. I'm definitely curious to see what her historical fiction is like, because their covers are beautiful retro bodice ripper covers at their finest, but I think I'll wait for them to go on sale before diving in.