WtAFW: Pounded in the Butt by the Blue Wave by Chuck Tingle 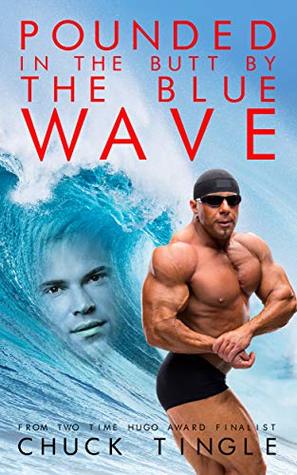 It's my first Chuck Tingle! I can't believe it's taken this long to get here but here we are, Pounded in the Butt by My Own Slow Reluctance to Accept True Genius. Because I'm now convinced that Mr. Tingle is, indeed, a genius. Reading this Vox article gives you a better idea of his motivations as a person, and honestly, how can you not like a person who refers to his fans as "buckaroos" and trolls the alt-right for charity?

Yellon is a pollster dressed in spiffy pollster clothes, but he has a not so spiffy pollster problem: despite all of the media articles out there touting the rise of the blue wave, the poll data is looking pretty, uh, flat. And not flat in a poundable way, but flat in a distinctly unsexy way. Yellon goes out in the world to figure out what's wrong, only to come face to face with the physical manifestation of a sentient concept, the blue wave itself, cruising around in its fancy voter mobile.

After a lunch date where they hit it off, Yellon realizes two things: one, he's only been polling people likely to vote and hasn't taken into account people, especially young people, who have historically not shown up to the polls (and now are! in droves!), and two, the blue wave is a consent king who desperately wants to take him to the poles-- the bed poles, that is-- so he can be pounded in the butt.

That said, there's no way I can give this a positive rating because it was so horrible, and lacked the certain je ne sais quois that I expect from stories of this type. But I love that this book apparently is a double feature, containing a free copy of POUNDED IN THE BUTT BY THE SENTIENT MANIFESTATION OF MY OWN IGNORANT CLIMATE CHANGE DENIAL.